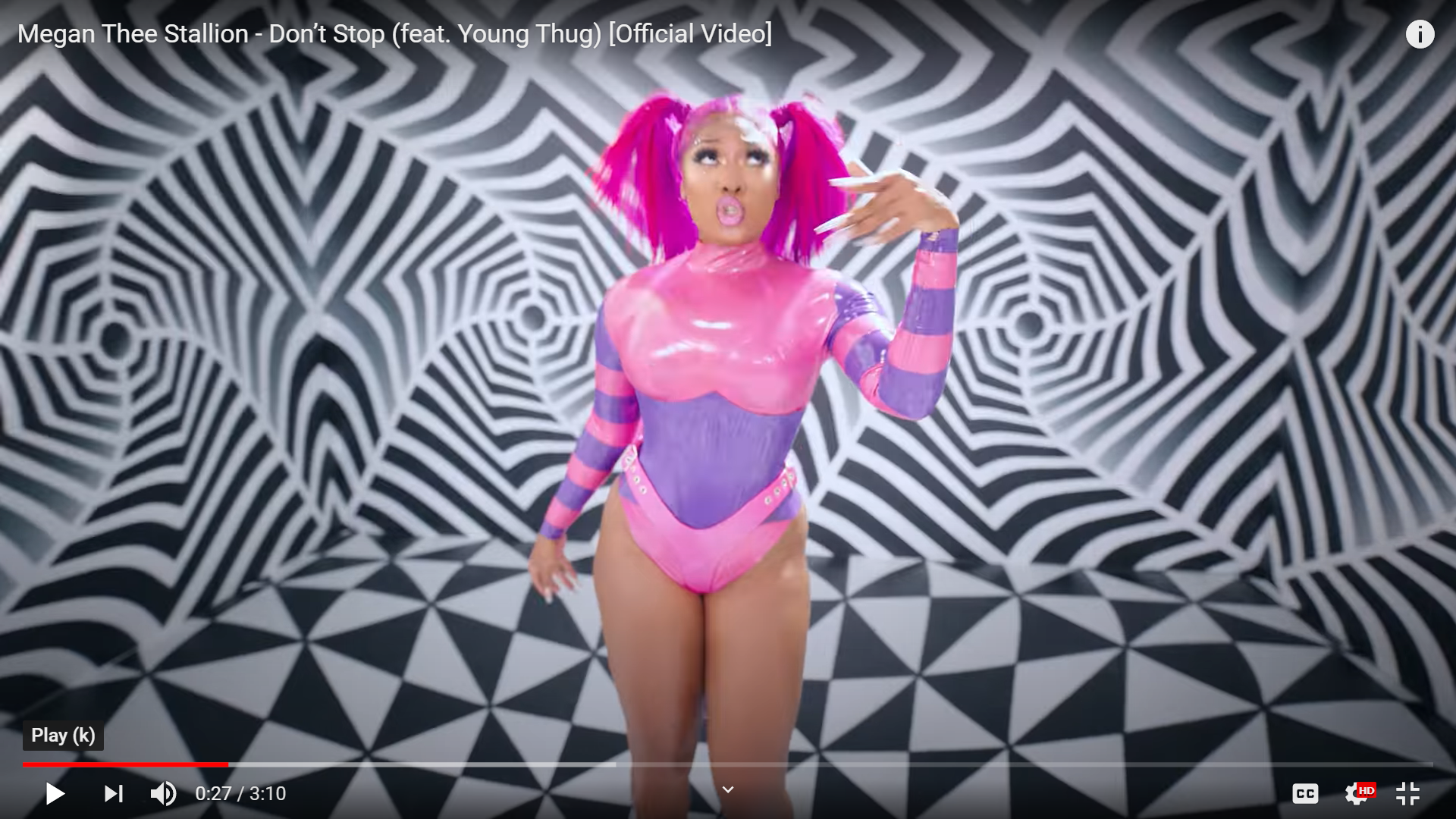 Latex lovers have so much to thank our modern-day divas for. We’ve been reporting for quite a few years how Lady Gaga, Nicki Minaj, and Katy Perry have been rockin’ latex couture (sometimes wearing Dawnamatrix latex pieces) seemingly every time they step out. But lately, Cardi B, Mulatto (go here to see Mulatto wearing some Dawnamatrix latex), and Megan Thee Stallion have been showing off their talents, bodies, and female empowerment wearing scene-stealing latex couture that has been truly upping the ante.

Just this past week, Megan Thee Stallion dropped her latest video, “Don’t Stop,” and appeared on the 46th season premiere of SNL…wearing latex all the way. In “Don’t Stop,” (see it here), she goes one better to Cardi B’s Lewis Carroll-like sets and colors actually paying direct homage to Alice In Wonderland (and beyond in the wardrobe choices she reveals). In the super sexy confectionary video, we see the 25-year-old rapper dressed in a sparkly face mask, matching diamond-encrusted corset, her hair set in a bejeweled beehive. Next comes her take on the infamous Cheshire pussy cat, with Megan wearing a pink and blue latex bodysuit, sporting a blow-up tail. As “Alice,” she is in a blue and white latex lace-up bodice and white leggings. Dancing ‘cards’ spin around her, dressed in card-suit latex bodysuits and leggings, revealing as much booty as their queen.

Speaking of queens, the main lady here shows off herself in full red latex with her hair dyed red, as the evil “off with their heads,” Queen Of Hearts.

And at the end of the video Young Thug makes an appearance sporting Edward Scissorhands arms.

If this wasn’t enough for alternate fashion lovers, there was Megan Thee Stallion’s two-song shot on Saturday Night Live. First, she and her dancers, dressed in black-and-white latex bodysuits, performed “Savage.” Later, for her second performance, the lady and her dancers were dressed in red latex for a blistering run-through of “Don’t Stop.” One should also remember, Megan was shot in both feet at the beginning of July! And here she is not only rocking great latex couture but dancing up a storm.