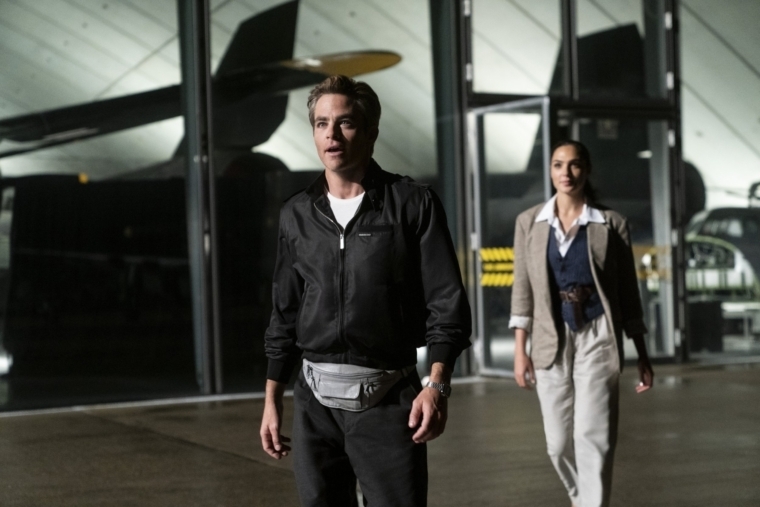 Anticipating the usual PVC, latex, and the classic semi-skirt, sleeveless chest-plate, and boots, cosplayers and fans of the newly released Wonder Woman 1984, might be in for a surprise when it comes to the movie’s costumes. Yes, the superhero/bad guy duds are in abundance, but one could argue that costume designer Lindy Hemming brings even more flair to the everyday couture of the characters in this sequel.

Both Gal Gadot and WW84’s villain, played by Kristen Wig, are allowed some spectacular wardrobe moments when they are seen as “Diana Prince” and “Barbara Minerva,” respectively. The women both sport sedate but perfect pieces of early 80’s wardrobe. Gadot in mostly muted colors and wide-collared button-down shirts and blazers; Wig trying to negotiate heels (a running joke here) and at one point white leggings and a tight dress/sweater. When we see them early on, both dressed-up for a well-heeled Washington party, the viewer gets to salivate over both lady’s haute couture, with Gadot in a stunning white gown with sky-high slit and Wig in an equally sexy and stylish in a skin-tight wrap around dress, her blonde hair in a perm stylish with the big-hair era.

The most fun the movie has with clothing is what Hemming puts Chris Pine’s “Steve Trevor” through. ‘Returning’ from the great beyond and many decades away, the movie’s most comical turn comes when Pine models a wild choice of 80’s clothes. Every outfit he picks, Diana softly says no to (although she does allow him the Nike Cortex sneakers he chooses), but it’s a hoot watching Pine change from one too-bright ensemble to the next. He goes thru a Members Only jacket, Casio watch, and when told he is wearing ‘parachute pants,’ the flyboy in him is so excited that everybody parachutes in 1984!

In addition to the sneakers, he insists on wearing a fanny pack.

Waiting as we all do for the appearance of Wonder Woman in her full gold Themyscira armor and Wig in her “apex predator” Cheetah transformation, these cosplay-salivating moments are not a disappointment. But WW84 costumes delights are above and beyond the bullet-deflecting Bracelets of Submission, the bright gold Lasso of Truth, and Wonder Woman’s tiara boomerang.