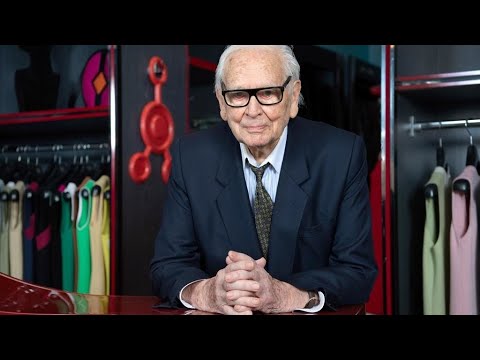 Maybe not so much with latex, but certainly making his mark with haute couture, alternative styles, and branding, Pierre Cardin infected the fashion world with his particular vision for seven decades. The giant of style died this week at age 98.

Born July 2, 1922, Cardin was in his early teens when he began his life’s work as a tailor’s apprentice. Turning twenty-three, he moved to Paris, studied architecture, and worked with the famous Paquin fashion house, as well as with Elsa Schiaparelli. While in the City of Lights, he met the film director Jean Cocteau, designing masks and costumes for Cocteau’s 1946 film “La Belle et La Bete,” as well as finding work with Christian Dior as a pattern cutter that same year.

It was at the start of the new decade when Cardin opened his first fashion house, keeping with his designing of costumes, this time for live theater. Three years later, he revealed his first-ever women’s collection and founded “Eve,” his first female boutique. It was then that he unveiled his infamous “bubble dress,” a loose-fitting garment that gathered at the waist and hem, ‘ballooning’ out at the thighs. Winning global accolades with this design, Cardin soon saw this and other of his wardrobe pieces worn by such notable ladies of the era, Rita Hayworth, Elizabeth Taylor, Brigitte Bardot, Jacqueline Kennedy, to name but a few.

Traveling to Japan in 1957, Cardin was among the first European designers to explore Asian sartorial influences, and in that same year, he opened his second Paris boutique, this time for men, called “Adam.” The men of the time he helped dress included The Beatles, Gregory Peck, and Mick Jagger…again, to name just a few.

Always the rebel, in 1959 Cardin presented a ready-to-wear show at the Paris department store Printemps, which got him expelled from the Chambre Syndicale, the French association of haute couture designers.

Following the space-race of the late ’50s and ’60s, Cardin jumped full force into haute couture cosplay of the first order with his “Cosmocorps” collection. The accessories for this collection included helmets, goggles, and thigh-high boots. His love for space never leaving him; two years ago, when staging a Cardin retrospective at the Brooklyn Museum, the show’s catalog posed the quote from the great designer about his vision for the future. He said, in part: “In 2069, we will all walk on the moon or Mars wearing my ‘Cosmocorps’ ensembles. Women will wear Plexiglas cloche hats and tube clothing. “

In the ’70s, Cardin put his name to a plethora of items, ‘branding himself well before the curve and trend. Items such as pens, water, and even sardines bore his name, the sales of which had earned Cardin over a billion dollars by the beginning of the new century.

There will certainly never be another designer/personality/visionary, quite like Pierre Cardin.