What A Star Worries About Most…Her Armpit 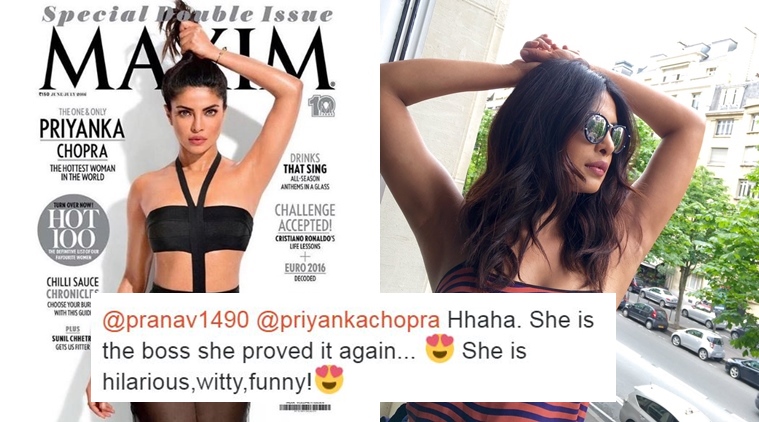 It would have been nice if all the attention had been on Priyanha Chopra, Maxim’s “Hottest Woman in the World,” wearing some super sexy latex outfit (though on the “Maxim India” cover she is sporting a Herve Leger cutout swimsuit). But what everybody seems to be talking about, and what the net has been ablaze over this week, is the 33 year-old actress’ armpit.

Certainly a ‘small world problem,’ even one Chopra has been having fun with, it seems that her photoshopped image on the cover of the Maxim mag-most specifically the altered armpit of her raised left arm-is getting lots of attention. These photoshopping scandals usually center around a model or celebrity caught in altered pictures so as to appear thinner (whether the model/celebrity doctors an Instagram shot themselves or a magazine has its way) but in Quantico star Priyanha Chopra’s case it is really more about how wholly unnatural she looks.

A piece of her, that is.

Certainly the paradigm of modern beauty demands an even more stringent smoothing (for women especially) than ever before. HD broadcasts, instant digital downloads, Instagram and Pinterest, viral videos have brought the royalty of celebrity under an exacting scrutiny of chew ‘um up and spit ‘um out over how perfect one does or doesn’t appear. Audiences are shown red carpet fashions at the same time as wardrobe malfunctions (it seems one doesn’t exist without the other), shows like Botched reveal cosmetic surgeries gone awry and the blistering speed with which celebrities post daily Instagram pics (again, many often photoshopped) can make even the most ardent Hollywood watcher nauseas.

At least Chopra has some humor about this all, and after all any news is good news, right? Tweeting about the armtroversy herself with an untouched picture of the armpit in question, Chopra added the hashtags: “#WillTheRealArmpitPleaseStandUp#nofilter#armpitdiaries.”