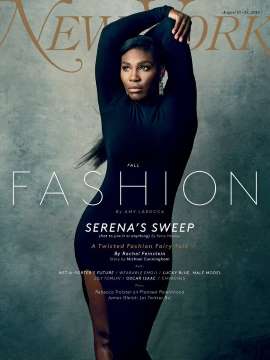 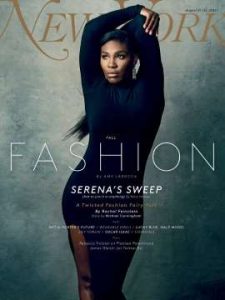 Though latex clothing would be damnably too hot for Serena Williams to wear during her play, the tennis star/glam slammer shows-off her fashion sense, as much as relates how important fashion is for her in the new double issue of New York Magazine. Serena relates how creating clothing has always been her first love really, but as she got deeper into playing (and winning) professional tennis she simply thought “I’ll just do athletic wear.” According to the new 2015 fashion issue of the magazine, Williams is looking to master couture wedding gowns as her next foray into couture (probably not latex wedding gowns though), having already created her “Signature Statement” line for HSN.

But Serena Williams, looking to win a grand slam at the U.S. Open (8/31-9/13) is certainly not the only highly visibly athlete to have created, endorse or simply have become synonymous with a clothing line.

David Beckham’s “Bodywear” line by H&M fashion features underwear and “comfortable clothing.” Seeing as we seem to see Beckham in his underwear mostly (and who is complaining really?) why not have this man’s perfect physique sell a line of underclothes he has put his name on?

Following in the footsteps of arguably the king of athletic wear, Michael Jordan (and more on him below) LeBron James’ fashion line with Nike has been a huge success. “The James Collection” includes athletic shorts and shirts, as well as graphic tees and hoodies.

And speaking of a stellar tennis star with the name Williams, Venus Williams (Serena’s sister if you didn’t know!) has her own “EleVen” fashion line. Venus’ collection features a goodly amount and seems to focus most on work-out clothing and accessories, though she does sell as some casual clothing.

And as mentioned there is Michael Jordan’s “Air Jordan” line begun as a sneaker collection with Nike back in the mid 80’s, now grown to an accessories and clothing behemoth that includes hats and even basketballs.

Whether one gets in on the act because of a love for fashion well before they rise in popularity (and bank-ability), or if they come to it later prompted on by marketing ad-men and women, lots of our athletes, like our movie stars, certainly have a say in the making of American fashion.