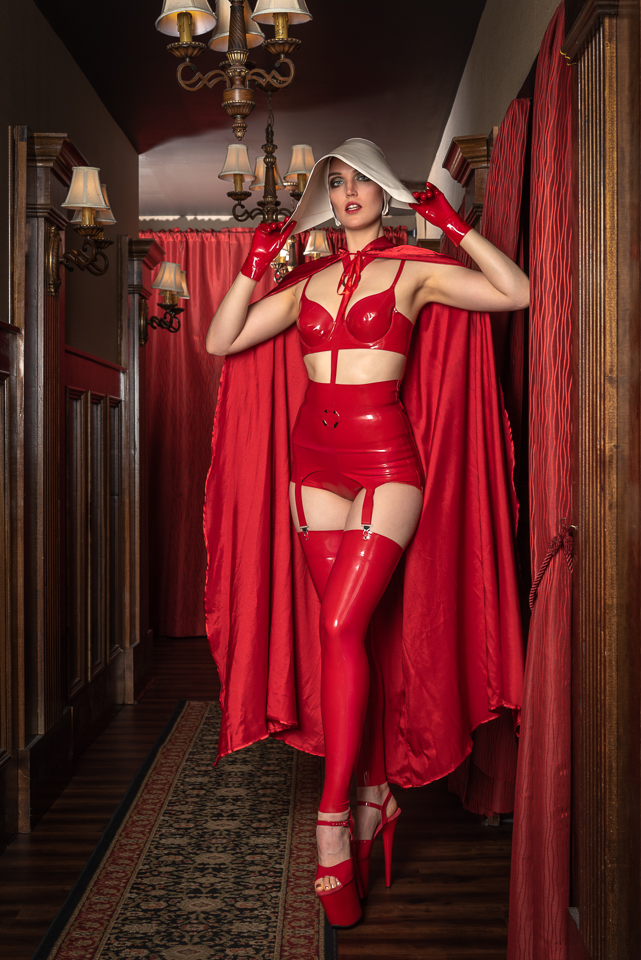 Fantasy fare is once again upon us and we say, ‘Let The Latex Couture Shine!’

The Handmaid’s Tale Season four release date dropped this week. The many fans of Margaret Atwood’s bestselling novel, and the Hulu series launched in 2017 from it, have been waiting on the edge of their seats since season three ended in August of 2019. It’s anybody’s guess what might happen next (even if certain characters will survive), but by all accounts, the show will be down to a meaty 10-show season for its fourth outing and will premier in fall 2020. That’s a long time for a rabid audience to wait to learn about June’s fate, and a whole bunch of other stuff about the goings-on in and around Gilead.

This all came from anther wonderful photoshoot with the equally wonderful Paul Allan.

And although we mentioned it before, (salivating over the fantasy wardrobe from it, actually) Birds of Prey (and the Fantabulous Emancipation of One Harley Quinn) is about to have its release (Feb 6th to be exact). With this movie coming and the animated Harley Quinn rolling along to everyone’s delight, we thought it might be fitting (and tight fitting at that!) in this quick little blog about imaginative costuming to show off a latex Harley Quinn Daddy’s Little Monster cosplay outfit we created here in the Dawnamatrix shop.

The Handmaid’s Tale, the various takes on comic characters like the wonderfully nutty Harley Quinn, all the humans/aliens/etc. dreamed up from such an array of talented writers, are such an inspiration to us all.