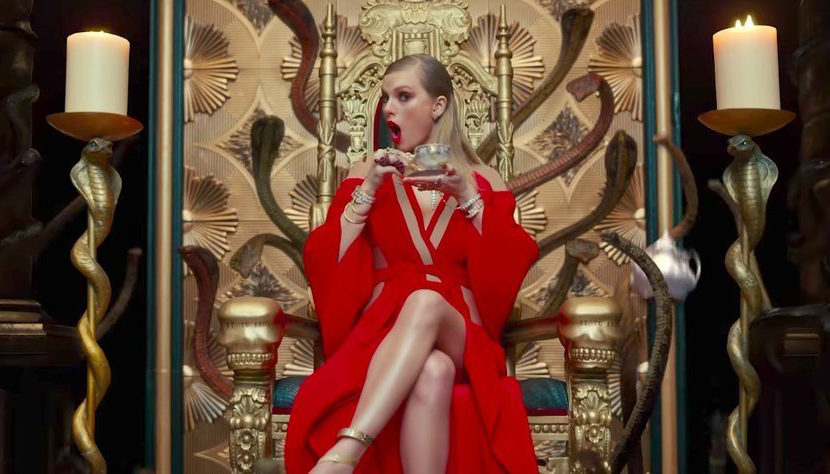 There’s still no latex outfits in sight but have you seen the multitude of costume changes that occur presently for Taylor Swift during her Reputation show? From a sequined black hoodie (that reveals itself later as a one-shouldered body suit) to a black high-slitted chiffon dress to a rainbow-colored beaded mini, to a long gown Ms. Swift has certainly worked on her costumes for this show to reflect a new ‘tude. She even has her dancers dressed in reptile skin suits.

And let’s not forget the custom-made Christian Louboutin thigh-high boots Ms. Swift features in a few of her costume changes.

To be sure, even the most causal Swift fan had to have seen this coming. Videos and the fashion choices Swift revealed all throughout her Reputation album release hinted at what she might manage for an image revamp…or at least hinted at the slight ‘maturing’ of her stage style. For one recent video Swift raided the infamous Stockroom for harnesses and tops. And in “Look What You Made Me Do,” the lady is surrounded by snakes. She continued to mix and match high-end haute couture designer duds with street-wear makers’ outfits bringing her new look present after a 3-year hiatus.

It all seems to have come together on stage for Taylor Swift presently.

Stylist Joseph Cassell Falconer lent his talents to Swift’s current stage costumes. And Swift’s dramatic stage sets, which indeed sees plenty of snakes on stage, and Taylor Swift floating across sage in gigantic snake exoskeleton, are far beyond anything this lady has attempted before in live performance.

A pop star need be forever challenging both their music and style and Taylor Swift seems to have been able to reinvent herself time and again, change music styles from country to pop to even sprinkling in some rap and she’s wearing some great stuff doing it.