Style, Cool, And A Fair Amount Of Leather: The Life & Times Of The Original Bandit, Burt Reynolds 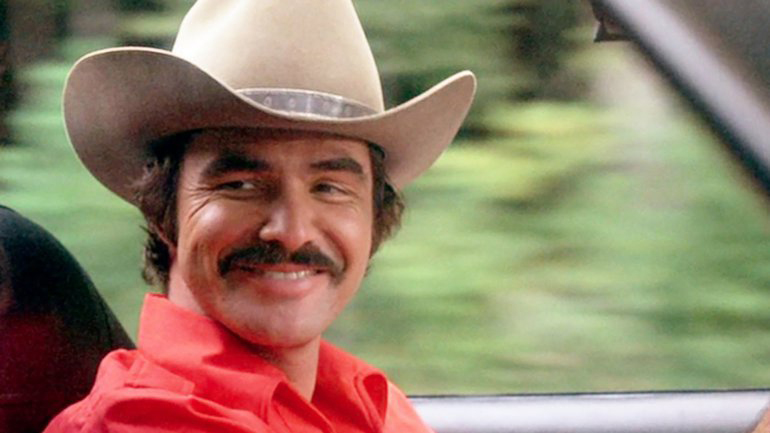 For those who have grown to adulthood in our age of latex couture lately, who have no real knowledge of movie-dom in the dim and distant 70’s, it might be hard to conceive of the popularity of Burt Reynolds. But the man was a super movie star of Herculean proportions, the No.1 box-office attraction for five years (in 1978 he had four movies playing across movie theaters at the same time) a champion of the Hollywood stuntman (and quite a stuntman himself), Golden Award and Emmy winner and Oscar nominee, and seemed, by his consistent wink, smile and wild high laugh to be having more fun than anybody else.

A football star in junior college Reynold’s took to acting there and after some Broadway and T.V. appearances, the good looking ex-athlete was mostly set for Brando-like roles. ‘Serious’ films like The Longest Yard and especially Deliverance later showed off his acting chops as much as a macho side, but in a culture shot-hear-round-the-world, Reynolds posed nude on a bearskin rug for a centerfold in “Cosmopolitan” magazine in 1972. He later claimed this cheeky shot caused not only Deliverance the respectability it deserved (it lost out to The Godfather for Best Picture in 1973) but also waylaid Reynolds’ reputation as a serious actor.

Iconic T.V. appearances on The Tonight Show, where Reynolds was able to show off his sartorial style in often uber tight, frequent head-to-toe leather haute couture helped him retain his superstar sex symbol status…and revealed a wisecracking attitude. He claimed that these appearances led to his further popularity. Reynolds was also linked to some of the most popular celebrity females of his day, Sally Field, Dinah Shore Judy Carne and Loni Anderson, these last two he was married to.

Living in Naples Florida for most if his life where he taught acting, and ran a theatre, Reynolds died there this week at the age of 82.