Sans Pants Across The World 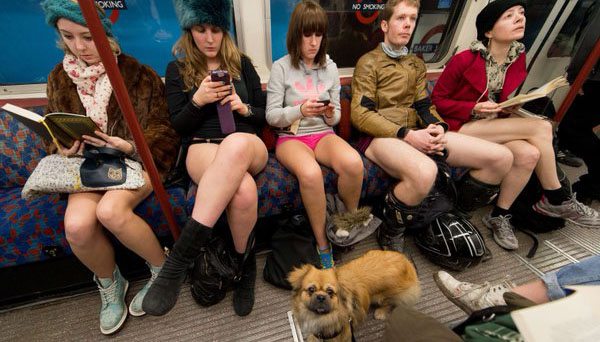 Not only were they wearing absolutely no latex clothing, nobody was wearing pants, at all!

With this past Friday being Cinco de Mayo one might not have noticed another event that happened, something that unfurls every first Friday of May each year: No Pants Day.

Conflicting accounts put the origins of this unusual communal occurrence at a Texas college campus decades ago when students decided to ‘drop trou’ in celebration of their end-of-the-year finals. Still, others put the blame on the Texas-based humor organization, the Knighthood of BUH. Whoever is responsible for starting the tradition it seems to have originated in the Lone Star State and despite its humorous humble beginnings, NPD grew so much through the 90’s that it became a country-wide holiday by the beginning of the 21st century.

The rule of the day: participants are not to wear pants of any kind, design or material. Skirts, dresses, kilts, a latex corset and matching panties, and other couture is fine…just no pants.

Now No Pants Day should not be confused with “No Trousers On The Tube Day” (a.k.a. No Pants Subway Ride), a yearly event held on January 10th. This sans pants tradition began on the New York City Subway in 2002, where seven riders went ‘underground’ to ride The Big Apple’s infamous mode of transportation without their pants. Four years later 150 participated in the New York City No Pants Subway Ride (where eight people were handcuffed for disorderly conduct); seven years later sixty cities were participating-London, Prague, Czech Republic, to name a few-and last year, Russia participated in the event.

No Pants Subway Ride (or No Trousers on the Tube Ride) was organized by another humor group, Improv Everywhere.

A cultural fashion statement made far from any red carpet, it seems, overall, the cities of the world are not so much detaining No Pants Day participants any longer. Everyone, wearing pants or not, seems to be comfortable with the good-natured meaning of showing off this much on specific days of the year.