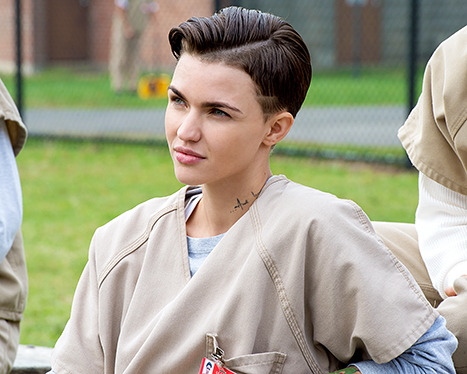 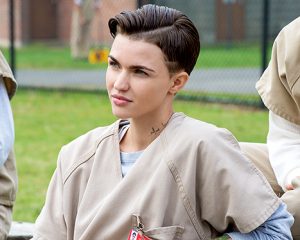 Certainly Orange Is The New Black is pushing boundaries in many ways, and MTV has never been against showing-off wild costume design, so matching an OITNB star with the used-to-be music video channel was sure to birth some surprises. But lately hosts, presenters and performers of these kind of awards shows are taking to changing their outfits and styles plenty during the night, as if the more one does so the more legitimate they are.

One can wear a hood or a sumptuous latex kimono and still feel the need to change-up, get into another piece of fetish wardrobe, accessorize. Akin to not being able to eat just one potato chip or considering that second tattoo, the thing with starting, adding to or bolstering a fantasy wardrobe is that one tends to want to add to that wardrobe again and again. And certainly a celeb of Ruby Rose’s stature or a Miley Cyrus (the reigning queen of award show change-ups) has the facility to keep changing during any one show or performance.

But really, for those of us into latex fashion design, wild cinema wardrobes, cosplay, mostly we all court the desire to switch-up, to always challenge, to try something new in what we wear, no matter how outrageous it might be. It is almost the raison d’être of the fetish fashion consciousness to be ever provocative, forever looking to the new, always wanting to prick sensibilities, even if it is just our own.

By the way…Happy Halloween; talk about wild wardrobe choices, go out and rock tonight!