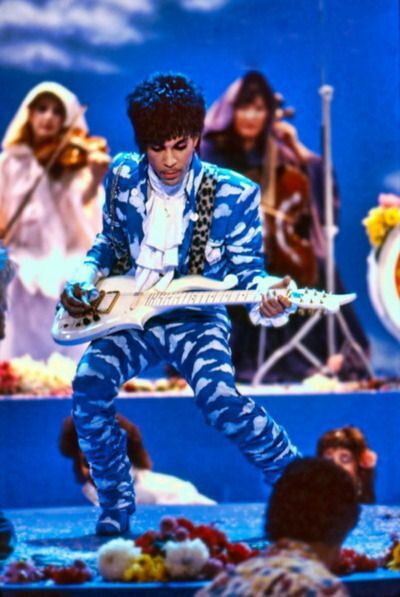 There have been latex undies. Regency-style purple trench coats and ruffled blouses. Purple knit gloves, embroidered kaftans, brightly-colored haute couture double-breasted suits, headbands, masks and hats, lots of glasses and scores of jewelry. There was even an infamous pair of seemingly booty-baring pants worn at a live MTV “VMA” show performance. During his career, Prince has worn all of this and more. He also wore, spun, danced, pranced, and posed in an amazing array of shoes.

A new exhibit featuring Prince’s shoes opens July 9th at the musician’s infamous Paisley Park music/performance/living complex, a “place where art, music, fashion, and culture are celebrated, energized, and inspired by the visionary creative spirit of Prince.” The Beautiful Collection: Prince’s Custom Shoes features more than 300 pairs of Prince’s shoes, plenty of one-of-a-kind bespoke pairs that Prince wore for performances and in videos, many created in collaboration with designer friends. Known for keeping mostly everything from his career, some of these shoes had been in storage for over three decades. Plucked from the ‘Purple One’s” collection are hand-illustrated booties Prince wore to the 1987 MTV VMAs, the sky-blue ankle boots with clouds he famously sported in the “Raspberry Beret” music video (Prince wore a matching suit made in the clip, see here), gold-on-black bespoke fabric shoes made by Versace and a pair of heels sporting “Free Music,” written down their heels. These last pair were made in the mid-’90s when Prince had changed his name to a symbol while undergoing his music publishing trials with Warner Brothers.

Prince frequented many of the same fashion collaborators over the years, including Kyriacou, Versace, and a made-to-measure shoe label called Andre No. 1. From his earliest emergence as a musical force to be reckoned with to his true first blush of rabid mainstream popularity with “Purple Reign,” to his further funky iterations, to even those years when he seemed to be on the complete outside of the music business, the man’s fantastic fantasy wardrobe was as unique as the music he continued to make.

The Beautiful Collection: Prince’s Custom Shoes is sure to thrill fans and fashionistas alike. Go here for more information.