Lil Nas X Does It Again…Without Even Meaning To 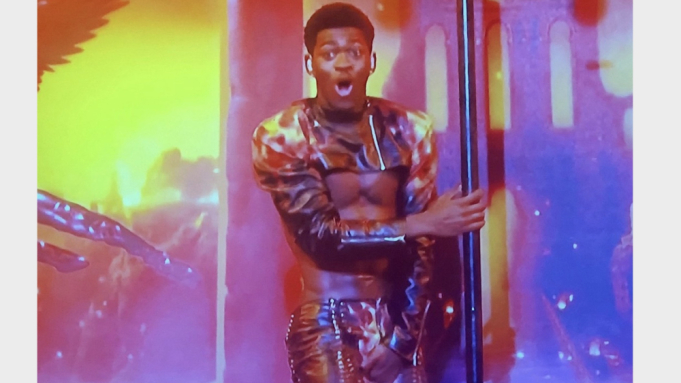 Whether they are wearing leather, jeans, some sort of latex costume, or anything else, we have seen plenty of celebrities suffer the dreaded and seemingly ubiquitous ‘wardrobe malfunction.’ It stands to reason that when one is dancing during high-spirited musical numbers, in often time already rather revealing stage couture, that one might find one’s body parts bouncing up and out, or a piece of clothing moving a little too much to the side, up or down. Britney Spears seemed to be experiencing her costumes opening and slipping regularly during her Vegas residency shows, Nicki Minaj has had a few mishaps, and now Lil Nas X can add his name to the list.

This past Saturday, during his appearance on Saturday Night Live’s 46th season finale, the “Old Town Road” singer revealed more than he wanted to. In the midst of the sexy all-male revue of dancers around him, and while performing his already controversial “Montero (Call Me By Your Name),” Lil Nas X backed up to the stripper pole on a platform behind him to begin showing off his skills dancing against the prop.

Unfortunately, the front of Lil Nas X’s leather pants ripped rather quickly into his gyrations, and he had to take to singing the rest of the song, leaning against the pole, with his hand in his crotch.

In the middle of his shirtless and sexy backup dancers, his hit pumping along, Lil Nas X pretty much kept his composer. He did take to Twitter to write: “I wanted to do my pole routine so bad this what I get lmaoo,”

Earlier in the week, Lil Nas X made news walking into SNL rehearsals wearing an off-white open vest, tailored trousers, and white super high platform boots set on jagged, claw-like platforms. One might recall Lil Nas X sporting quite the pair of sexy thigh-high boots (in a latex finish, no less) in the video for “Montero (Call Me By Your Name).”