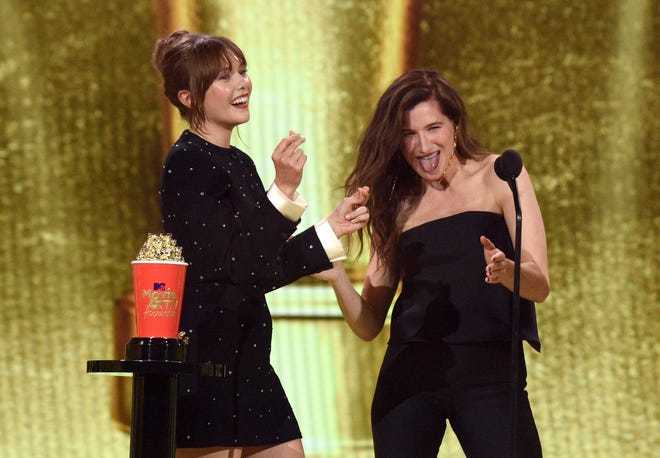 With MTV foisting two award shows on the public this year, we thought we had double the chance of a movie or music star rocking a cool latex outfit. Alas, we weren’t treated to our favorite textile, but there were some fun wardrobe choices to look at during both the 2021 MTV Movie & TV Awards this past Sunday and the first-of-its-kind award show, the 2021 MTV Movie & TV Awards: UNSCRIPTED that followed the next night.

Actress Yara Shahidi took to the night out in a bustier matched with wild color printed trousers and a matching jacket. The pants and jacket are from her collection with Adidas, and according to her description, the startlingly colorful print is an “ode to her Grampie and his Persian rug shop — emphasized further with contrast details and a bold graphic on the back.”

Straddling reality TV as much as scripted, actress Chrishell Stause wore a bright yellow Mugler mini, while Chase Stokes of “Outer Banks” fame came suited all in red. He accessorized by wearing red and white sneakers. Jurnee Smollett was one of the actresses showing the most skin stepping out in a strapless Alexandre Vauthier jumpsuit sporting side waist cut-outs. Her lace-up boots just added to the sexiness. But it was Addison Rae, gaining her initial fame as a TikTok’ influencer’ who dared to wear a sheer bra instead of a shirt under her jacket and super-low-waisted skirt. Accessorizing with a silver chain belt, the 20-year-old certainly garnered most of next-day near ‘breaking-the-net’ chatter.

With ‘real’ TV stars honored by MTV on the second night of the award show rollout, it was no surprise that Snooki appeared with her other castmates from “Jersey Shore.” For this outing, the petite reality star and mother of three wore a black silk mini and duster. While “The Real Housewives of Beverly Hills’ Erika Jayne, no stranger to wild and sexy stage costumes, wore a bright blue minidress with a floor-length coat over.

It’s anybody’s guess if MTV will produce two back-to-back award shows again next year. One thing is for sure, though, even if they aren’t wearing latex couture specifically, the fashion choices of music and movie stars always prove interesting.