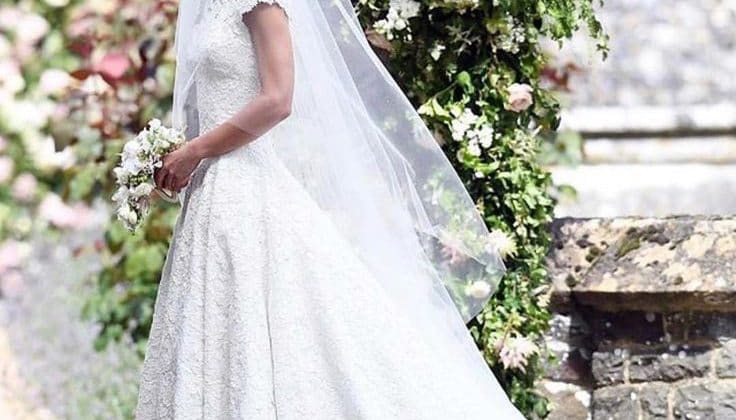 We could wish for even a hint of latex couture, but when one considers the occasion-a lavish wedding of England high society-one realizes the wedding dress here wouldn’t be very much at all like the wedding gowns we design. Still, Pippa Middleton looked resplendent in her Giles Deacon dress.

The blinding white gown sported both a price tag of £40,000 and a long delicate train, and Pippa augmented it by wearing a tiara and custom made veil. Marrying James Matthews at St. Marks Church this past Saturday, Kate’s wedding, as all aspects of her life, enjoyed public attention ever since her sister married Prince William six years ago.

Royal (or near royal) wedding dresses have been sartorial stars in the public conscious for a very long time. Wallis Simpson wore a simple, form-fitting, Mainbocher non-traditional dress in her non-traditional wedding to the Duke of Windsor in 1937. Grace Kelly enlisted the costume designer who had worked with her at MGM, to design her dress when she married Prince Rainier. And arguably the most iconic modern-day wedding dress was the David and Elizabeth Emanuel gown worn by Princess Diana in her 1981 wedding to Prince Charles.

Now with posted pictures and video scrolling across every conceivable social media matrix, Pippa’s dress-even the clothes worn by her niece and nephew at the event-was front page news this week. Overhead shots of reception tents and the church amidst the greenery of the English countryside brings to mind the voyeurism that comes from actors and actresses getting hitched or rock stars trying the knot.

What was also news was a controversy that ensued just after the wedding.

The bride had to enact some legal action as it seems menus from the wedding were put on sale on eBay for £5oo. Pippa’s legal action brought those menus down right quick.