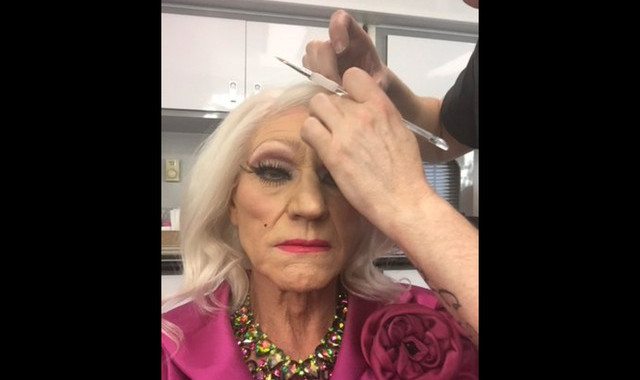 When one of our more recognizable stars dresses in leather, lace or latex, pretty much we all take notice. (Of course one gets a latex outfit or some leather looking as sexy as possible and pictures will most likely go viral!) But when a star dresses opposite his or her gender, whether in latex, leather or lingerie, you bet in this current climate it makes the blog o’ sphere pretty damn fast. But taken in the spirit it was intended, one realizes that Patrick Stewart dressing in drag was quite fun indeed.

The ex Captain of the Enterprise, dressed-up in a pink dress, black heels and jewels (even sporting the glittery accessory of a diamond clutch) to promote the 2nd season of his Starz show “Blunt Talk.” Nails to match the dress, eyelashes, purple eyeshadow and a striking white wig completed the 75 year old actor’s transformation for an “Emmy for Your Consideration” event. On a show where Stewart says he often repeats to himself: “I’ve never done that before” about his character’s actions, coming out in drag to speak about the show seemed apropos, he felt.

As a man used to wearing Starfleet uniforms, chain mail in “Excalibur” (a cosplay dream movie) and surely lots of interesting wardrobe for his many turns on stage reciting Shakespeare, we can be assured donning a dress for an evenings’ Q&A didn’t shake Stewart all that much. But with all the current back and forth over North Carolina’s ‘bathroom laws’ (whether or not people need to use bathrooms according to their birth gender), concerns pro and con about Will Smith’s son Jaden wearing a skirt in a Louis Vuitton add and the question of transgender civil rights in general, we can all take a breath from the major concerns of our day and have a chuckle at a man in drag who meant for us to chuckle.