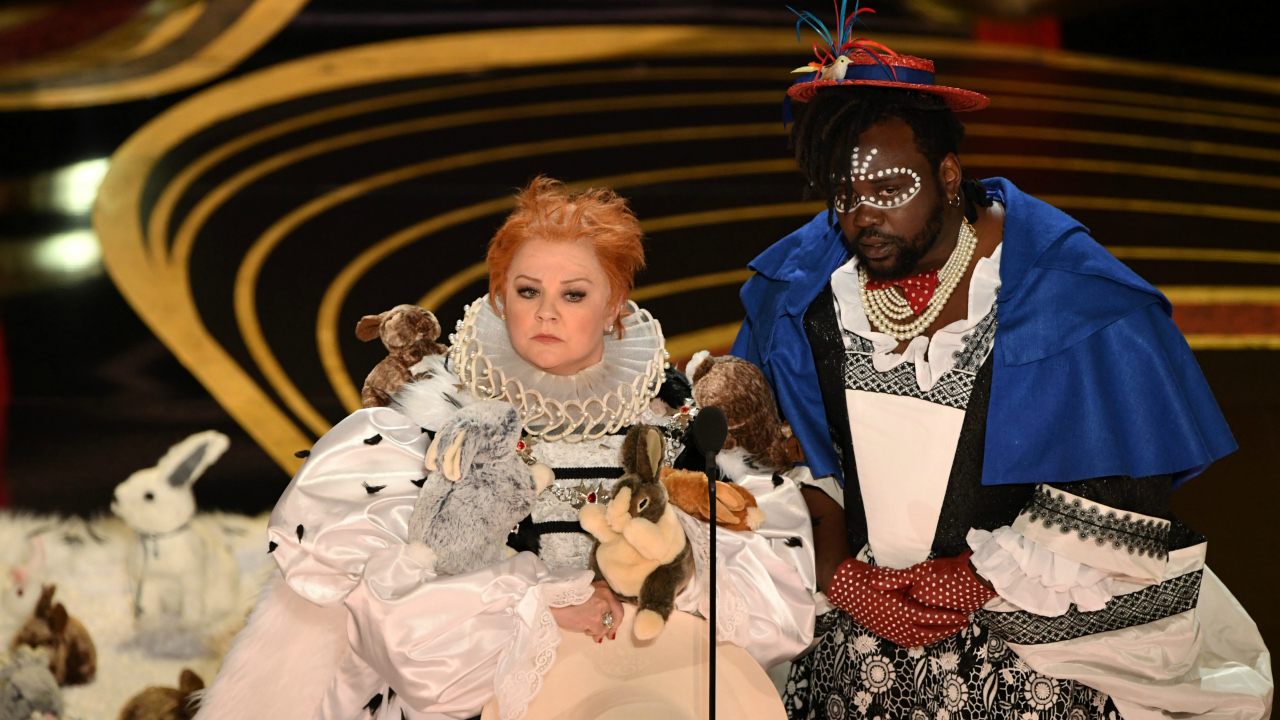 Yes, there was the usual round of haute couture, and gleaming jeweled accessories, and even one striking latex outfit…imagine that! But there was also a good amount of fun being had in how the celebrities were dressed at and after the host-less 2019 Academy Awards this past Sunday.

As always there was no ignoring Jennifer Lopez’s wardrobe choice. This night she wore a metallic-tiled high-necked Tom Ford. Or the fact that Zoe Kravitz and Jason Momoa donned not one, but two matching pink outfits, from the actual show to the after party. But Tommy Hilfiger’s two-color plaid suit and Pharrell Williams in his camo jacket and shorts certainly struck a spirit of whimsy with what was worn down the red carpet and on stage at the show.

Arguably Melissa McCarthy managed the most comedic wardrobe turn. Presenting the Oscar for Best Costumes, she paid tribute to the film The Favourite, dressed as a modern Mary Queen of Scots with a few furry friends.  Under her wide-brim white hat, McCarthy wore a multicolored dress, pants under this, white boots, and an obviously royalty-inspired frilly collar. Attached to her, referencing the rabbits that appear prominently in The Favourite, were stuffed rabbits….all the way down her train, in fact. She even addressed one of the rabbits as a puppet during her presentation.

The ‘After Party’ moments that seemed most fun? Melissa M. in her Adidas tracksuit and James McAvoy collecting autographs across his dress shirt at the Vanity Fair Party.

That latex outfit? Rachel Weisz wore a red latex Givenchy, and the Twitterverse went wild referencing his look with her sexy turn in her film Disobedience. Does art imitate life or the other way around?

Whatever the case may be, our best and brightest seemed to be enjoying their dressing-up during Hollywood’s most recognized night.