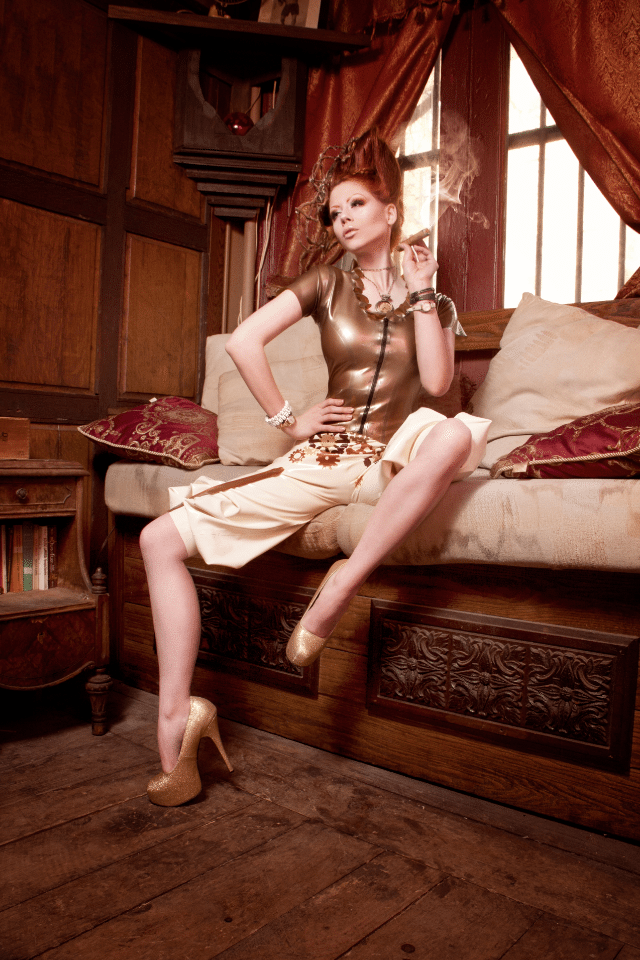 When it comes to shooting models in our clothing we do like to get out and about. Our latex creations, models, photographers truly flourish at location shoots. From Miami to The Netherlands, to a whole host of interesting locations we have been privileged to work in over the years very often it is “location, location, location” that makes a shoot that extra special. We got lucky recently on a Steampunk-themed shoot when premier latex photographer Erik Von Gutenberg and premier alternative model Ophelia Overdose came to Diamante’s Cigar Bar (and also at a steam-powered factory that same day) to shoot pieces from our Steampunk line.

For those of you who have never been, Diamante’s is described as (and pretty much is) the ultimate environment in which to both purchase and enjoy tobacco. Built inside a turn-of-the-century brownstone, with a lounge of leather and wood interior and fireplace, the place sports five humidors, private membership lockers and a vintage chandelier that needs to be seen to be believed.  Owner David Diamante, the ‘voice’ of the Brooklyn Nets and a distinguished boxing announcer, is an avid cigar connoisseur. He’s traveled to Cuba, Nicaragua and Honduras to learn as much as he can about how cigars are made.

The club hosts private parties, live jazz performances, classic boxing nights…and shoots like ours.  It is a one-of-a-kind location in the Fort Greene section of Brooklyn and if you are in town and a fan of a good cigar you really should visit the place…ot if you simply like stunningly cool spots.

In a city like NYC and its surrounding boroughs there are plenty of original spots to explore; Diamante’s is truly one of these places.

We were thrilled to have shot there.