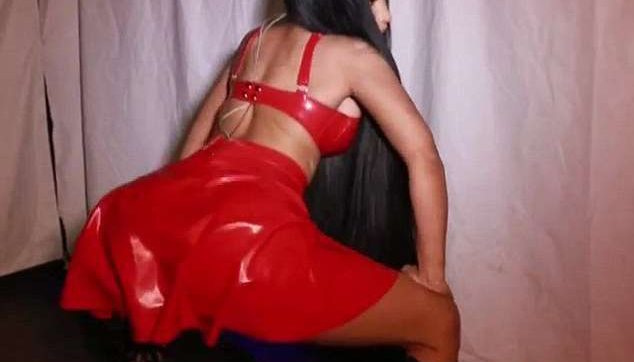 She may have just surpassed Aretha Franklin’s record, but most importantly, once again, Nicki Minaj was wearing one of her latex costumes in an Instagram pic she posted to celebrate. It seems the 34-year-old rapper beat The Queen Of Soul’s Billboard accomplishment of having 73 songs in the Billboard Hot 100; Nicki just managed 76 entries. In her two-piece red latex Nicki was seen “twerking” about her latest pop accomplishment, (pictured here).

This is not the first time for Minaj and our favorite material, of course.

She sported a one-piece red latex outfit just a month ago. In an Instagram picture she titled “McQueen”, Ms. Minaj showed plenty of herself in the couture’s cut-outs and bare mid-section. For one of these particular shots she also wore big sunglasses that covered most of her face. With the new Wonder Woman movie due soon Instagram followers quickly commented that in her McQueen outfit Nicki might just be perfect for the female superhero role.

And there is the cameo Minaj manages in the new Jason DeRulo and rapper Ty Dolla $ign video. At about a third of the way in (see the snippet here) N.M. makes an appearance in a pink latex crop and pink high waisted bottoms, with over-the-knee boots and once again those big shades.

Following the progression of a super pop diva like Minaj one as much comes to listen to her changes, as see them. As the woman’s proportions seemingly progress with her music and style certainly Ms. Minaj seems to be lately wiggling well past any effect we might have enjoyed from Lady Gaga latex showings or even Katy Perry latex (though Perry’s new “KP4” album is about to hit, so who knows what wild styles she will be rocking soon.)

FYI, Minaj’s songs “No Frauds,” “Regret in Your Tears” and “Changed It” popped her up over Aretha.