Don’t think for a second there isn’t a cartoon out there for your latex outfit loving lusts.

Born in Western Canada in the early 1960s (and still living there) writer/cartoonist Roxy Katt first published erotica in 1997 in Heavy Rubber Magazine’s first edition. She jumped a few years until the mid-2000’s publishing again in earnest in anthologies by Cleis Press, Constable & Robinson, and Logical-Lust, and the many books she produces to this day. Presently she’s got a kinky story coming out in December in the print/ebook anthology: Best Lesbian Erotica of the Year, is working on a novella set in the 1960s-a BDSM romance between a woman and a phallogyne (a leather-suited chauffeuse)-and promoting her Naughty Tales of Leather and Latex, published by the new and rising publisher Wordwooze.

A cartoonist of a certain self-described ‘simple’ style Roxy admits that she feels she does not have the skills to make her cartoons more complex…though they needn’t be as seeing how effective they are. To make a latex outfit appear shiny she simply draws small shapes on them in thin lines to represent the parts where the skin is particularly reflecting, leaving those bits white when she colors in the rest of the outfit. But she agrees, there is a dearth of latex cartoons out there…and she doesn’t rightly know why.

“There are tons of people drawing variations of Batgirl and Catwoman (two of my great inspirations) but they don’t usually put them in the kinds of scenarios I envision.”

But mostly for this writer/artist of fetish fashion and naughty scenarios, it is all about the people who inhabit her work. 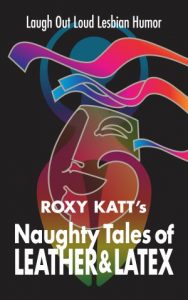 And her Naughty Tales of Leather & Latex here.