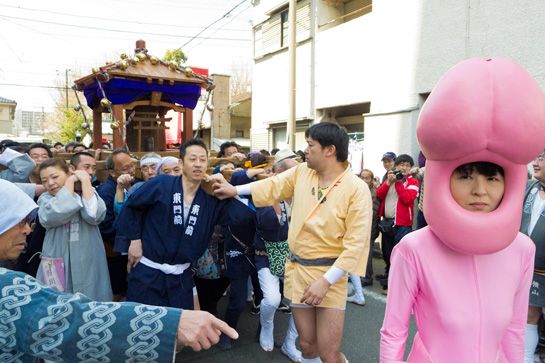 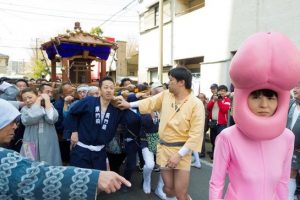 It’s a sure bet you’ll find some of the very best latex clothing couture in cities like San Francisco, London, Amsterdam, and Berlin. You can also assume the very best kimonos can be found in Japan. And pretty much, this is the truth, although we try our best with the Dawnamatrix collection of latex kimonos. But when you are thinking of where to catch the best collection of kimono-wearing crossdressers in Japan, you only have to look at the ancient Kanamara Matsuri (Festival of the Iron Phallus).

The date for the 2017 Festival has just been announced (or more precisely the festival has just been added to the Fest 300.com site with an as-of-yet TBA for April indicated), but once again old and young alike will come to worship the phallus “mikoshi” paraded through the streets. This alternative festival had its beginnings in the 1600’s during the country’s Edo period, when town prostitutes would gather at the Kanamra Shinto shrine in Kawasaki, praying for protection against sexually transmitted diseases. Legend also has it that a local blacksmith came to dispatch a sharp-toothed demon inhabiting a certain area of new brides’ bodies; unsuspecting grooms would meet a rather untimely painful end at the dental abilities of this demon on their wedding nights. The Kanamara shrine is dedicated to the blacksmith who battled and defeated this dental demon, and over the centuries many people have come to pray at the sacred spot for fertility, protection from communicable diseases (most recently H.I.V.) and simply to hope for healthy lives.

These days the multi-day festival celebrates the male member in all its fantastic forms, from puppet phalli, to candy shapes, to penis floats and that parade-of-the-penis many costumed Japanese follow and cheer for. And amongst those costumed are grandmothers, to factory workers, to kids following the parade and outdoor celebrations, dressed (or cross-dressing) in kimono as is their desire.