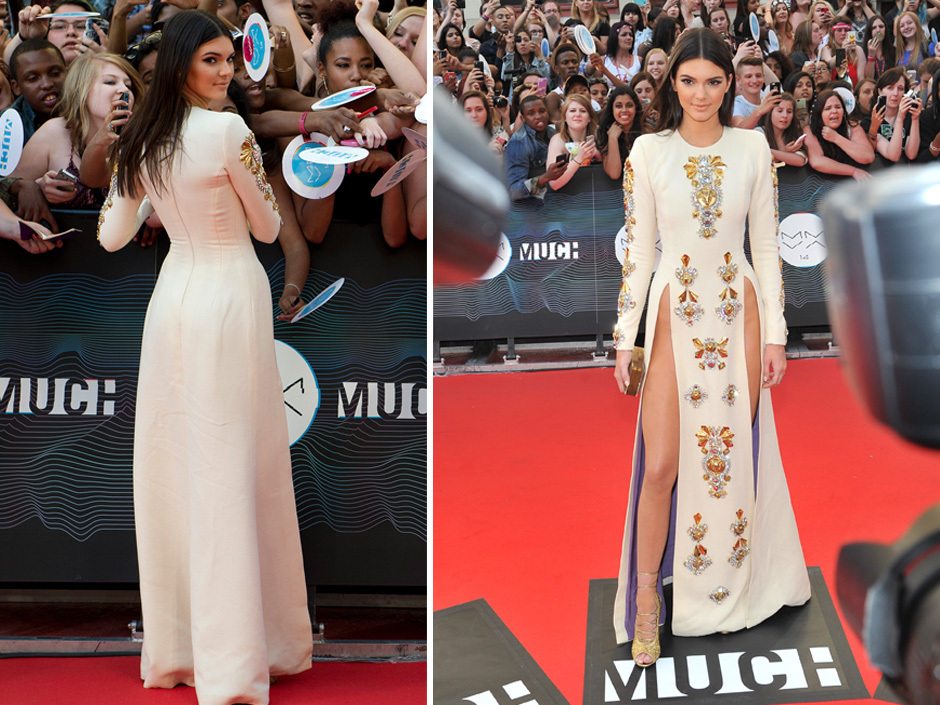 Not that the young woman and her family haven’t enjoyed copious amounts of press already but Kendall Jenner really wowed them all at Sunday night’s MuchMusic Video Awards. Co-hosting with her little sister Kylie Kendall sported a Fausto Puglisi long-sleeve gown with sky-high slide slits open all the way up her expanse of pretty leg, so much so that she showed her pelvic bones. The blogosphere was agog, critics weighed in yeh or ney and basically once again a celebrity made national emergency news with what she wore and what she showed from it

Here at Dawnamatrix we know all about and champion a woman (or man’s) want for showing skin. Latex haute couture is as much about what we can reveal through contoured seams and skin-tight high grade materials as much as it might be how much leg is revealed in something like our Dragon Lady Dress. When it comes to alternative wardrobe creations, sexy see-and-be-seen dresses for the scene, accessories that add just that tremor of danger or a good old fashioned piece of lingerie, we are all for showing as much as you like. An ‘unzip’ is as good as a ‘wiggle-up-into’ or ‘out-of’ as far as we’re concerned, the dip of our Decolletage Catsuit proves that, as do so many of our designs.

That anyone is making a fuss about Kendall revealing her hip bones probably speaks less to this daring fashion choice then to the fact that one makes a certain celebrity one’s every move is scrutinized to the umpteenth degree. Whatever the case may be, the young woman looked smashing and when it comes to either concealing to reveal or unzipping to show off we say celebrities as much as all of us of the great unwashed should fill our wardrobe with that that makes us feel great about…us.

Do what thou wilt we say…just make sure the clothes flatter you when you dare to be bare.