Katy Perry Gets ‘Cozy’ For Christmas 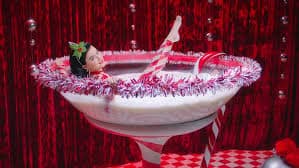 There’s no denying that a little red latex for the holidays could make one appear either naughty or nice (or a little bit of both). In her new video for her original Christmas tune, “Cozy Little Christmas,” Katy Perry offers her own particular haute couture holiday sassiness with a bunch of different outfits and hairstyles, plus some old-time stop motion animation.

Possibly in answer to the recent “Baby, It’s Cold Outside,” reboot by John Legend and Kelly Clarkson, or just wanting to appear her usual flirty fun self, here Katy and Santa seem to be getting very cozy indeed. From lounging by the pool, to sharing a couples massage given by a reindeer, (Katy flashing bum) to the 35-year old pop diva engaging in a milk-shot drinking contest with Rudolph, Frosty The Snowman and what looks like her version of Abominable Snow Monster, we get lots of the supersaturated confection Perry is known to exploit.

Katy Perry’s costuming here runs from the opening shot of Katy decorating a tree wearing a red-and-white mini, with gold glitter antlers and Christmas ball earrings.  Katy wearing a red velvet bodysuit with white fur accents.  And Katy wearing a red and white bathing suit while lounging around the pool (Santa wears a Hawaii shirt, shorts, and red and white shoes in this scene). And in the last shot, she sports a green bow in her hair while fully dressed up in a red, strapless, gown.

The most striking wardrobe, though, has to be K.P. in a one-piece candy cane striped sparkly leotard she wears while bathing in a sky-high martini glass filled with milk (or is that nog?).

Katy Perry fans are wondering if this video, dropped just yesterday, might signal the singer releasing her 6th studio album before Christmas. So far, Katy Perry has released three singles from the highly-anticipated record.