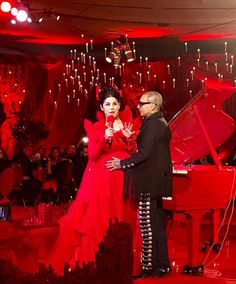 And here we thought a latex wedding dress was a nice alternate approach to the usual nuptials. Leave it to tattoo artist and celeb Kat Von D to ‘drop’ a wedding video, just about on Friday the 13th no less, that revealed some of the most fantastic wardrobe we have ever seen on a bride and groom.

And heartfelt sentiments from the happy couple that will bring tears to your eyes. 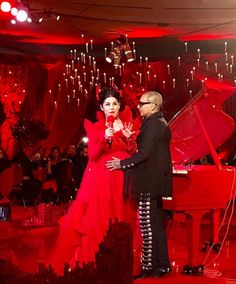 Kat and Prayer’s singer Leafer Seyer were married in June in a secret ceremony, but a pro shot video of the event was just released for fans and the curious to salivate over. Set center of the invited was a high platform where the couple read their personal vows to one another and later Kat performed Nick Cave’s, “Into My Arms,” on a piano as red as her dress. Along for the night the couple also provided entertainment to their guests; close-up magic performed by Mike Pisciotta, music from Matty Taylor, and Robert M, Harvey, and contortionists dressed in latex. The room was awash in red, the couple sat alone at their head table high atop red and black roses and Kat even made sure to serve a totally vegan meal.

You can see highlights of the night here from the wedding video.

What is particular interesting from a sartorial standpoint—and what we focuses in on particularly—is that Kat worked with Majesty Black designer Joshua David Reno on her dress as well as the suit Leafer wore. With designing begun back in March, things took on a decided slight change (one could say ‘alteration’) when Kat revealed that she was pregnant a month or so closer to the ceremony. Still, her all-red gown was a fantastic haute couture creation, topped off with the near antler-like horns she wore on her head. Leafer was dressed in an all-in-black Reno creation, complete with a stunning long veil.

There might have been a royal wedding just recently, one that the whole world watched. But now we have a chance to spy a little of Kat Van D’s ceremony and can see how royally she outfitted herself, her groom and the day.