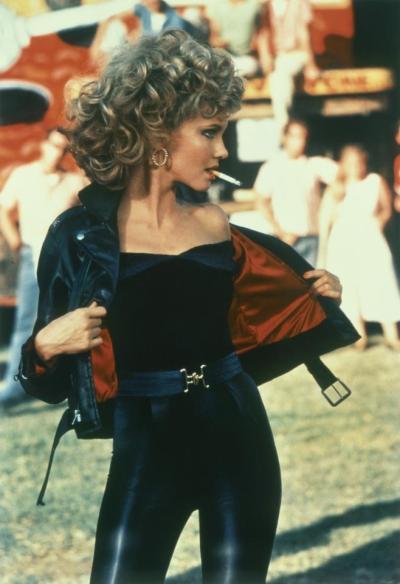 Although neither was wearing any latex couture, still, we can’t ignore that the costumes John Travolta and Olivia Newton-John wore at the finale of Grease iconic. In their matching leather jackets and John’s stunning (and tight) black silk leggings, when “Sandy” surprises “Danny” at the school fair at the end of the movie, she hits back at his gang-leader bravado with her ‘bad girl’ couture, as the couple sing the hit “You’re The One That I Want .”

This weekend Travolta and Newton-John reunited and ‘redressed’ in their Danny and Sandy duds respectively for a “Meet n’ Grease” sing-along held at the Coral Sky Amphitheater in West Palm Beach, Florida. In addition to ending the night in those iconic bad boy/bad girl fashions for an audience Q&A and sing-along, the two walked into the event dressed in similar wardrobe choices to those they wore in other parts of the movie. Olivia Newton-John wore a yellow cardigan and matching the poodle-like skirt, and John Travolta was wearing all back, sporting a leather jacket.

In fact, Newton-John just auctioned off her famous movie-ending black leather jacket to raise funds for her Olivia Newton-John Cancer Wellness and Research Center (she raised $243,00.00 in that sale). The man who purchased the jacket gifted it right back to John, wishing her “Godspeed for a quick recovery.” Olivia Newton-John had her first battle with cancer in 1992, opening the ONJ then. She overcame cancer in 2013, but two years ago in she was told cancer had metastasized and spread to her bones.

During the first two days of November, just past, there was another, totally unrelated auction held in Los Angeles. A bunch of Grease memorabilia was sold during these two days, with proceedings going to the Olivia Newton-John Cancer Wellness and Research Center in Melbourne, Australia. At that auction, Sara Blakely, founder of Spanx, bought the black satin leggings John wears in her bad girl personification at the end of Grease, for $162.500.