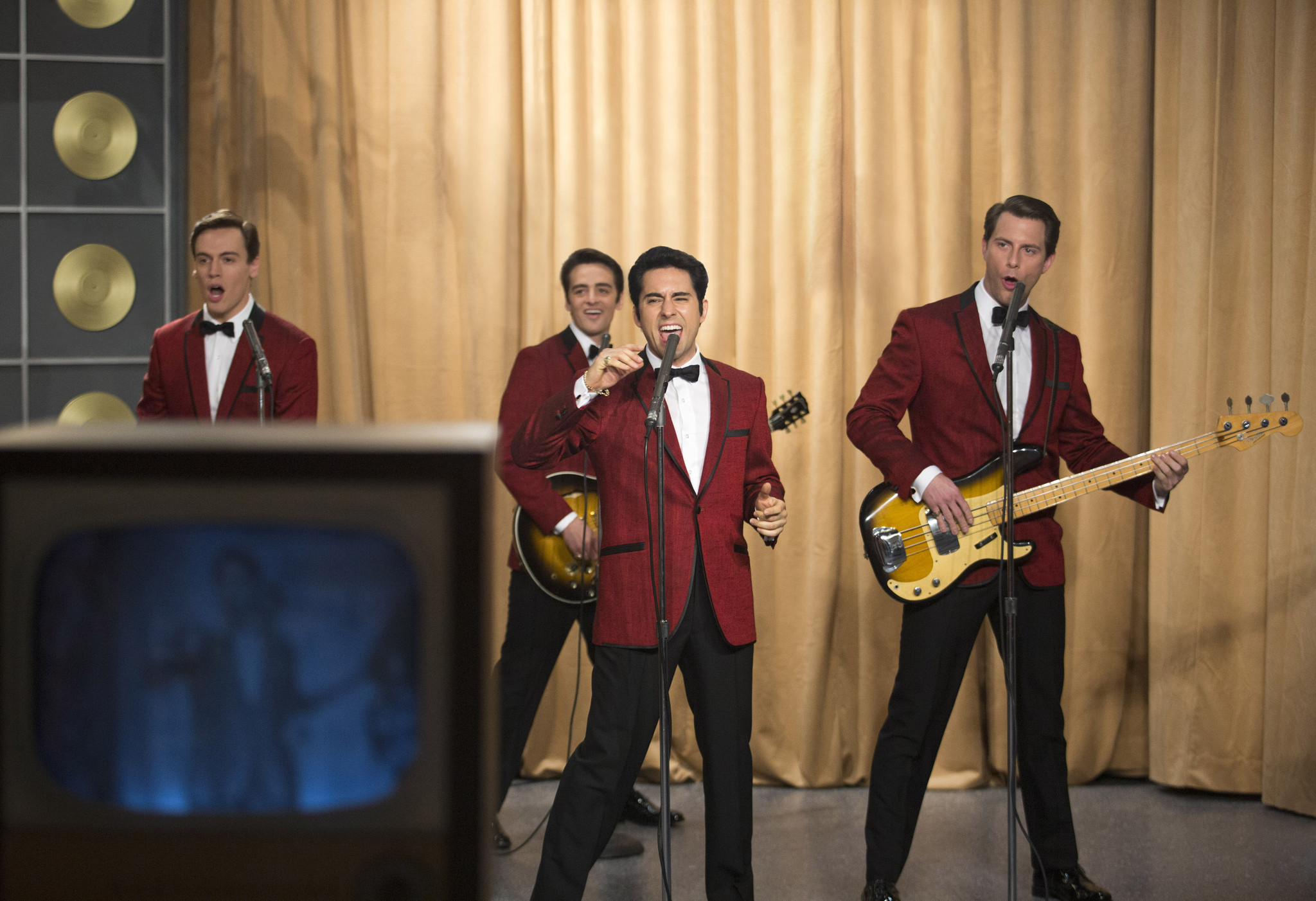 Yes, we are paying lots of attention to summer movies here. There were those few blogs about the magnificent Maleficent (the fantasy outfits, hair styles, make-up Angelina Jolie sported were just too fetish-y wonderful to ignore). And we’ve opined about superhero-like fare that’s upon us this summer to. But ‘reality movies’ (in fact a bio pic) can also have lots of wonderful fashion in them and this is certainly case with the super smart suits and 50’s/60’s fashions in the new Jersey Boys movie. 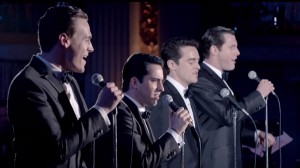 Clint Eastwood directs from the hit Broadway play the bio film of Frank Valli and the Four Seasons. The recreation of the music is pretty much spot-on (see here for a review of the soundtrack) and the costuming by Debora Hopper-which is the art in America we are especially interested in-is spot-on stupendous. There are those slick sexy shiny skinny suits, long gowns, tuxedo ware and so much more fashions evident in a movie that runs through quite a few decades. As the music of this famous American band evolved or at least changed, so did the fashions and a “period piece” like Jersey Boys truly brings out the best and brightest of Hollywood set designers, prop people and costume designers. As with Maleficent the magic was is in the creation of a magical space; with a movie like Jersey Boys the magic is bringing to life a readily recognizable recent history we can almost reach out and touch.

The ‘boys’ in the film are played by John Lloyd Young as Frankie Valli, Vincent Piazza as Tommy DeVito, Michael Lomenda as Nick Massi and Erich Bergen as co and often hit songwriter/singer/producer Bob Gaudio. The wonderful fashions they and their fellow cast members wear in Jersey Boys, while wholly not fetish or even made of latex are luscious fantasy creations all the same and do remind us of a few Dawnamatrix designs. From elegant long female dresses of the era our Catwalk Gown instantly comes to mind and what elegant lady’s dress or gown wouldn’t benefit from the classic accessory of Wrist Length Gloves. And of course for the men we have the dress-up design of our latex Tuxedo Shirt.

Inspiration and influence from times past and movies that celebrate them; Clint Eastwood’s Jersey Boys is another wonderful Hollywood fantasy concoction not far from a latex designers’ heart.