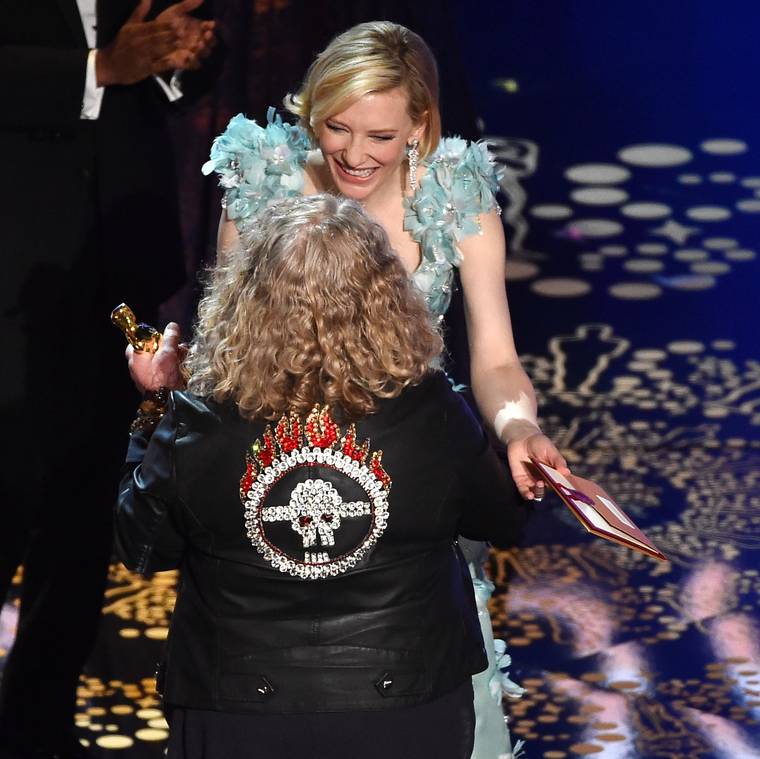 Yes, once again we saw no latex bodysuits or accessories walking the red carpet, but there was one true alternative wardrobe moment at this year’s Oscars. Worn by none other than 2016 Academy Award winner for Best Costume Design, Jenny Beavan-winning for her work Mad Max: Fury Road-the lady paid homage to her film by wearing a leather jacket sporting the film’s skull logo on its back. Claiming to press backstage at the broadcast that she “absolutely” does not wear heels and “I look ridiculous in a beautiful gown.” Beavan certainly represented the rebel in us all, if only ultimately for her comfort, and didn’t look anything like the “bag lady,” Stephen Fry claimed she did.

This is Beavan’s 2nd Academy Award win. She previously won three decades ago for A Room With a View but has been nominated 10 times. This lady winning for such wild designs in her movie this time and sporting her leather jacket is a nice counter to all the high couture frock-ery of who-is-wearing who and in many cases, for what cause…as we even reported on in our last blog. At this 88th award’ show that was suffering from more than a bit controversy, Beavan’s wardrobe choice is decidedly a smaller bit of news to be sure. But for alt. couture fans and fantasy film freaks the very fact that Mad Max (and The Martian) made the list of Best Picture nominees is heartening, as is the costuming within those movies. Mad Max especially showcased some truly delicious dusty leather and steampunk latex outfits that have already been and will be seen again for cosplay opportunities.

Beavan’s fellow nominees were: Sandy Powell for Carol, Paco Delgado dressing a man as a lady in The Danish Girl, the certainly fantastic costuming needed in Cinderella provided by Sandy Powell and bear-killer wear made my Jacqueline West for The Revenant. An eclectic deserving mix of talent to be sure…but nobody other then Beavan went all 80’s rocker on us!