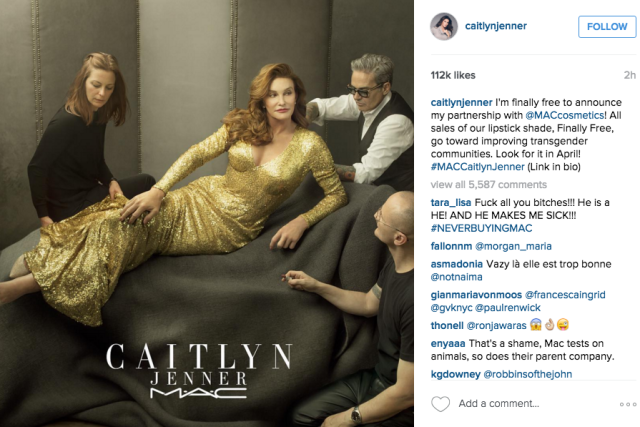 Though none are wearing latex clothing to better their causes, Pam Anderson, Caitlyn Jenner and Christian Siriano seem to be marrying a message with their latest fashion work. Jenner has partnered with a major makeup company helping to fight AIDS and further transgender causes. Anderson showed lots of herself (not that that’s unusual in and of itself) for vegan shoes and famed fashion designer Siriano is looking to bring awareness to global water problems at this year’s Oscars.

The world’s most famous transperson presently and super popular cosmetic company M•A•C are creating the Finally Free lipstick (out 4/17). All money made from the sales of the “rosy nude” color-as Jenner calls it-lipstick will go into helping the M•A•C AIDS Fund Transgender Initiative that supports various programs of transgendered communities.

Appearing in PAPER Magazine this week, we once again got an eyeful of Pam Anderson nude. But this time there is a cause behind the ex-Baywatch beauty baring all. Anderson has partnered with French footwear designer Amélie Pichard to create vegan shoe wear. Ten percent of the sales of the heels, which include some in ‘retro’ colors, others with a see-thru heel, go to Anderson’s non-profit, the Pamela Anderson Foundation. As she said about the collaboration: “I wanted to contribute to fashion and beauty to offer cruelty-free fun choices.”

When the E! channel’s Maria Menounos broadcasts the fashion exhibition from the red carpet at the 2016 Academy Awards telecast tomorrow night, take a good long gander at what she is wearing. Menounos will wear one of two dresses designed by Christian Siriano, inspired by beverage company Stella Artois, paying homage to the world water crisis being battled by Water.org. Artois is chipping in by selling limited edition chalices, with everyone sold prompting the beverage company to “provide five years of clean water for one person in the developing world.”

Sometimes celebrity fashion pursuits can indeed further a good cause.