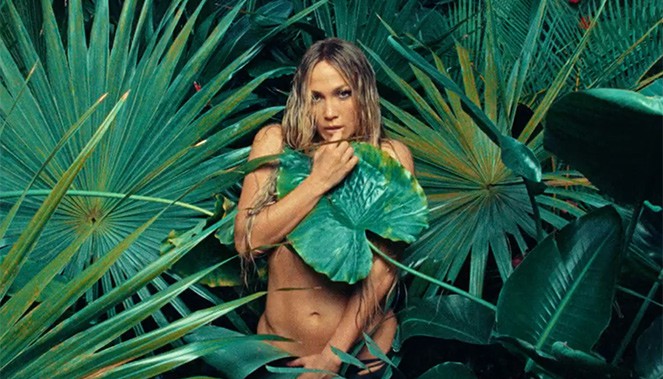 A latex clothing designer can’t be jealous that out of all the smoking sexy outfits Jennifer Lopez wears in her new video for “Ni Tu’ Ni Yo” none were made from our most favorite material. The array of costume changes here, how perfect J.Lo looks and the consistent Latin pop heart of the tune makes this certainly one of the best videos to hit now mid-summer.

Sung all in Spanish, with Cuban reggaeton group Gente de Zona, Lopez stuns spinning, posing, and performing in this clip which was shot over two days in the sultry heat of Islamorada, Florida. Lopez’s ex (but still business partner) Marc Anthony makes a cameo at the beginning here-seeming to come in to consult on the shoot-while the video’s director joins the couple and obviously has more to contribute, which Lope takes to.

A “behind-the-scenes” clip unfolds where we see Lope in a dizzying array of colorful wardrobe choices (some so flowing we know a latex kimono would have fit here perfectly, just sayin’). Calling in a who’s-who of haute couture favors for this video Lopez  wears a sequined Tom Ford dress (Rihanna wore the same dress for her April 2016 Vogue cover). She reveals her killer long legs in a Fausto Puglisi gown with a sky-high slit, the very same one she wore at Macy’s Fourth of July just passed. And she also sports Jimmy Choo, Michael Costello, Giuseppe Zanotti and Balmain.

There are even scenes here (see below) of the 47-year singer/dancer/icon appearing naked save for some large fronds covering her.

Lopez will release Como Ama una Mujer, her first Spanish-language album in September; “Ni Tú Ni Yo” is the third “preview” from that album. We are sure to see more colorful, sexy and perfect wardrobe turns from Jenifer Lopez before Como Ama una Mujer is released and we are sure to see Jennifer Lopez looking every bit the superstar she always has been whenever we do see her.