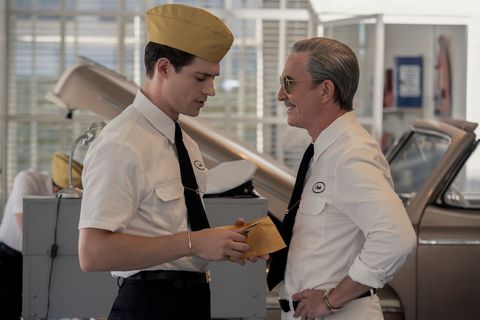 Ryan Murphy forgoes horror, latex, leather, and other dark wardrobe choices for his new Netflix series, Hollywood. But the costuming for this new show from American Horror Story creator is just as impressive as it has been for all Murphy’s productions, due, in no small way, to Ryan once again enlisting the team of costume designers, Sarah Evelyn and Lou Eyrich.

Hollywood, premiering this week on Netflix, is all but an allegory of the famous movie-making mecca during the 1940s. Inevitably reflecting the fashions of the times with their bespoke pieces, Evelyn and Eyrich say they took Ryan’s vision for more muted colors (golds, browns, hunter greens) to outfit their actors and actresses wearing traditional pencil skirts, cardigans, and high-waist trousers. They even manage some actual fetish-y turns—if one is of a mind to find them so— over perfect recreations of uniforms of the day.

The first episode alone sees lots of textile art attention on smart, sleek gas station uniforms. With requisite cloth hats, ties, crisp white shirts, and pressed trousers, the detail of the wardrobe of workers at show’s ‘Golden Tip Gas Station’ is pristine. “Ernie” who runs the place (played by Dylan McDermott) is based on the infamous Hollywood icon Scotty Bowers. Bowers wrote Full Service: My Adventures in Hollywood and the Secret Sex Lives of the Stars, a tell-all take of brazen sexuality. When leaving the Marines in the early 40’s Bowers headed to Hollywood and worked at a gas station on the corner of Van Ness Avenue and Hollywood Boulevard. It was there that he began ‘seeing’ famous male stars of the day, having sex with them, then later setting up the men who worked the station, and women friends of his too, to ‘trick’ for the celebrities who came to know, trust and use him for procurement.

Netflix indeed allows for a good amount of naughtiness to be explored on this account.

One of the more fantastic haute couture moments in this first episode is layered upon Patti LuPone in her first appearance. As aging silent film star “Avis Amberg” she drives into the Golden Tip for anything but gas. Within a matter of minutes, we see LuPone go from wearing a smashing leopard print hat with jacket lapels that match, then later in a silky peach robe, and even later then this, in a black bustier.

And this is just the first episode.

Movie-making homage, some seeming upcoming taut race relations, a fair share of sex, lots of high caliber acting, and rich costuming is sure to make Hollywood a winner.