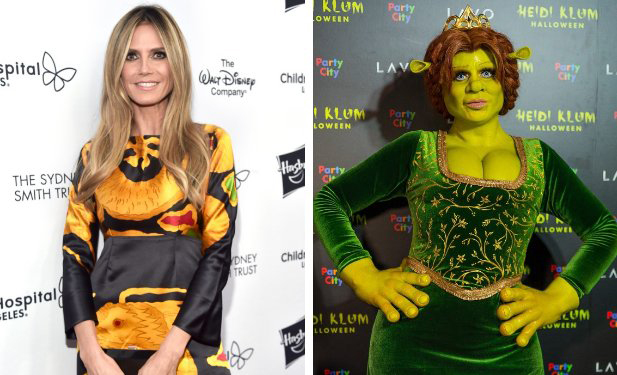 It’s as hard to get past Halloween without some latex accessory or a carved pumpkin, as it is not mentioning what Heidi Klum wore. The supermodel’s annual Halloween party is infamous for celebrities coming out dressed in all their finest Halloween frockery. But it’s most famous for Klum revealing her yearly pulling-out-all-the-stops over-the-top amazing costume concoction.

Dropping a quickly shot video on Instagram a few days prior to All Hallow’s, the net was buzzing over what the 43-year old might be turning herself into. Oversized prosthetics was all Klum revealed, keeping everyone guessing until she showed up to her party in an onion coach, decked out as Princess Fiona from Shrek. Her boyfriend, Tom Kaulitz was Shrek.

The green prosthetics and make up covering the super model’s famous face, and pretty damn near perfect body, completely transformed Heidi Klum. On Halloween she did post more video, of her actually getting made up and dressed as Princess Fiona. The process proved as interesting as the results (man, what this lady puts herself through!)

In addition to Klum, guests at this party now in its 19th year, included, Lupita Nyong’o, wearing a plaid skirt, suit and hat, dressed as “Dionne” from the movie Clueless. Model Bella Hadid, and singer the Weeknd dressed as Lydia and Beetlejuice, respectively. Winnie Harlow channeled RuPaul with her red latex thigh-high boots and body suit. Harry Connick Jr. came as a football player and Padma Lakshmi as the Black Swan from the movie Black Swan.

As we might recall, Heidi Klum’s costumes have ranged in variety from her dressing as an old woman, with a whole bunch of Heidi Klum clones attached to her, as “Jessica Rabbit” and as Michael Jackson in his Thriller werewolf wardrobe. By all accounts though, the lady really outdid herself this year.

Heidi Klum’s Halloween bash is connected to the charity work the lady is deeply involved in.