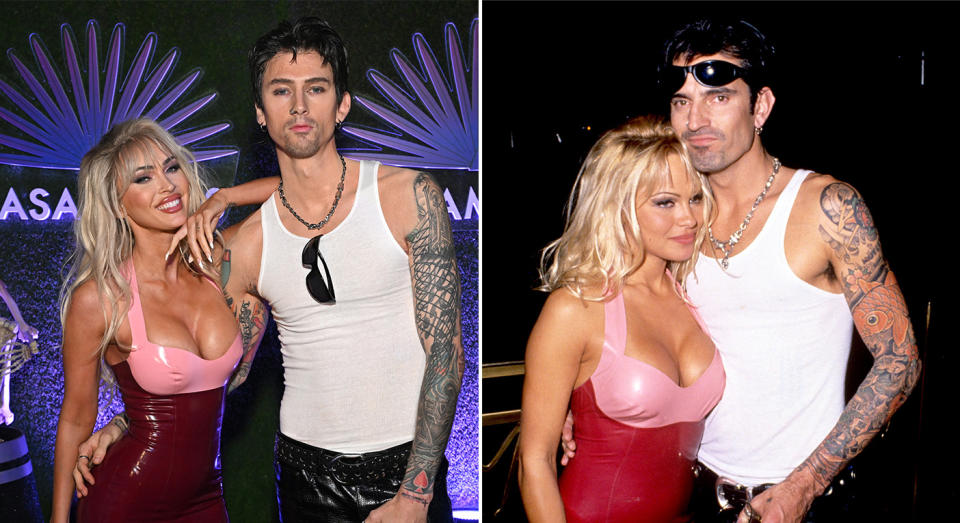 In our last blog, we mentioned how you could spruce up a Halloween costume or base your trick-or-treating look on some latex couture or accessory. It seems that some of our more popular celebrities not only managed to do this, but some also courted controversy over the past weekend and yesterday. But then again, what’s a good Instagram post or a night out without all eyes on you and blogs a’blogging?

While Heidi Klum, pretty much always a fabulous go-to for Halloween dressing up, went as a worm this year (and her husband Tom Kaulitz a fisherman), another well-known couple courted controversy with two different costumes. Machine Gun Kelly and Megan Fox began their Halloween dressed as Pamela Anderson and Tommy Lee. Kelly wore a white tank, while Fox rocked a red and pink latex bodysuit. What seemed to have earned them more than a small amount of criticism is in the carousel of videos they took for this look; in one, Kelly, as “Tommy” is seen managing a snort of mock cocaine off of “Pam’s” chest.

The couple’s second look of the night, saw Kelly dressed in long black and red priest vestments holding a leash attached around Fox’s neck, as she knelt before him, open mouth, tongue out for an offered communion wafer. She was dressed in black PVC; an open top with high crossed neck, fishnets, thong, and thigh-high black boots. They captioned this Instagram post:

“On Sundays we take communion,”

Whether or not she ‘broke’ the internet, Kendall Jenner‘s sexy take on “Jessie” from Toy Story saw her in cow-print chaps attached to denim belted bottoms revealing quite a bit of her bottom and a red wide-brimmed cowgirl hat. Kylie managed a few turns as Elvira, sporting a high black beehive hairdo, plunging long-sleeve black dress, then in a second look, wearing a jeweled bra sporting spider-shaped nipple tassel. She paired the look with sequined fringe bottoms, thing-high stockings, and a shimmery bolero to tie it all together.

Lastly, for the clan, sister Kim turned out perfectly as “Mystique” from X-Men, attending a birthday dinner that she quickly found out wasn’t a costume party. No controversy here, just a simply faux pas.

More costume choices coming in our next blog…