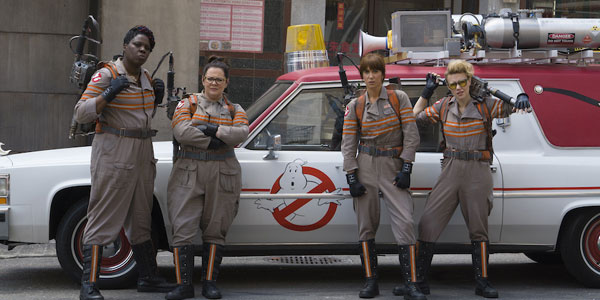 There is no denying that cinema wardrobe, from Indy’s fedora to even some latex outfit accessory can easily become synonymous with a certain movie character. Even beyond the realm of sci-fi and fantasy where we readily accept such things, we all too often match a character’s dress or even a movie’s overall ‘style’ with colors and materials. Then of course, there are indeed those characters who are born and bred to the costumes they wear; any superhero or even everyday laymen (and women) who create seemingly makeshift suits to fit their needs.

As we have so often opined, the clothes certainly can make the movie.

The ladies of the Ghostbusters reboot are sporting those famous jumpsuits like the busters from the original movie, but costume designer Jeffrey Kurland invested the new outfits from a whole other source…and a New York City one at that. The “Patty” character in the film works at the MTA, so the jumpsuits these modern day Ghostbusters wear are taken from the subway company and added to; “inspired” might be the best way to describe the female Ghostbusters’ look, this time around.

Of course, using Metropolitan Transportation Authority suits is as much to pay homage to what came before as another way to marry this comedy/fantasy franchise to the city it is part and parcel of…a city many would agree has its own ‘style.’ And as surely as the movie makers of the new Ghostbusters are hoping the movie plays well around the world, we all know you can take Ghostbusters out of New York City, but you can’t take New York City out of this franchise.

Surely, this Halloween will seem like 1984 as kids (especially ‘girls’ of all ages) take to sporting the infamous Ghostbusters jumpsuits, as will there be an uptick in Ghostbusting cosplay, as people celebrate Melissa McCarthy, Kristen Wiig and the rest of the crew in this modern day reboot of a costumed classic.