Getting’ Excited By Suicide Squad…A Whole Half A Year Away 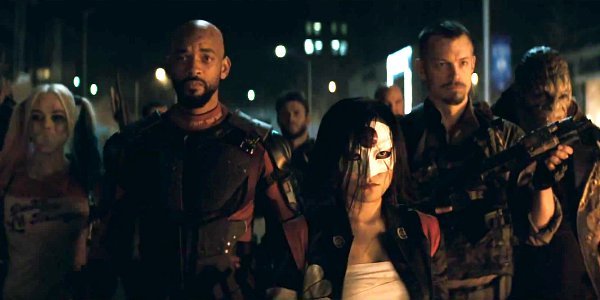 With rapper Common confirming his participation in the Suicide Squad just this week, and a new banner ad for the movie just revealed showing the slew of bad guys in all their meanest poses and high fantasy cinema wardrobe, August can’t come soon enough. With Jared Leto morphing into the “Joker,” Margot Robbie as “Harley Quinn,” super model Cara Delevingne as “Enchantress” and Will Smith as “Deadshot” (to name just a few of the actors playing what characters in this film), come the end of summer (the movie opens August 5th ) we are all certainly going to be in for some fun.
What makes Suicide Squad especially delicious is that in this movie the audience has to sympathize with villains…and super villains at that. Always the more interesting of characters in any drama, and as we have seen from the comic, as well as stills, poster and trailer for the movie, these “worst heroes ever” get into some dangerous doings that might not be done in the most highly moral of ways.

Hell, they are taken out of prison to help in super secret government mission.

And then there are those costumes…

Though criticism has already been leveled at Delevingne’s bikini  (where do we ever see Enchantress really ever show so much skin?) and Jared Leto’s Joker’s tats have been blogged about incessantly, we’ve already seen plenty of Suicide Squad cosplay…with so many baddies on screen, this is a film just bursting with possibilities really. Can we even count how many young women wore hot short pink shorts and pony tails at last year’s Comic-Con?; this year’s Comic Cons and Halloween 2016 will certainly see even more men, women and kids dressing-up as the Squad. Supporting a costume design/wardrobe department that IMDB lists as forty three person strong, we alt. cinema wardrobe lovers are salivating over Suicide Squad…and all the news we get about it.