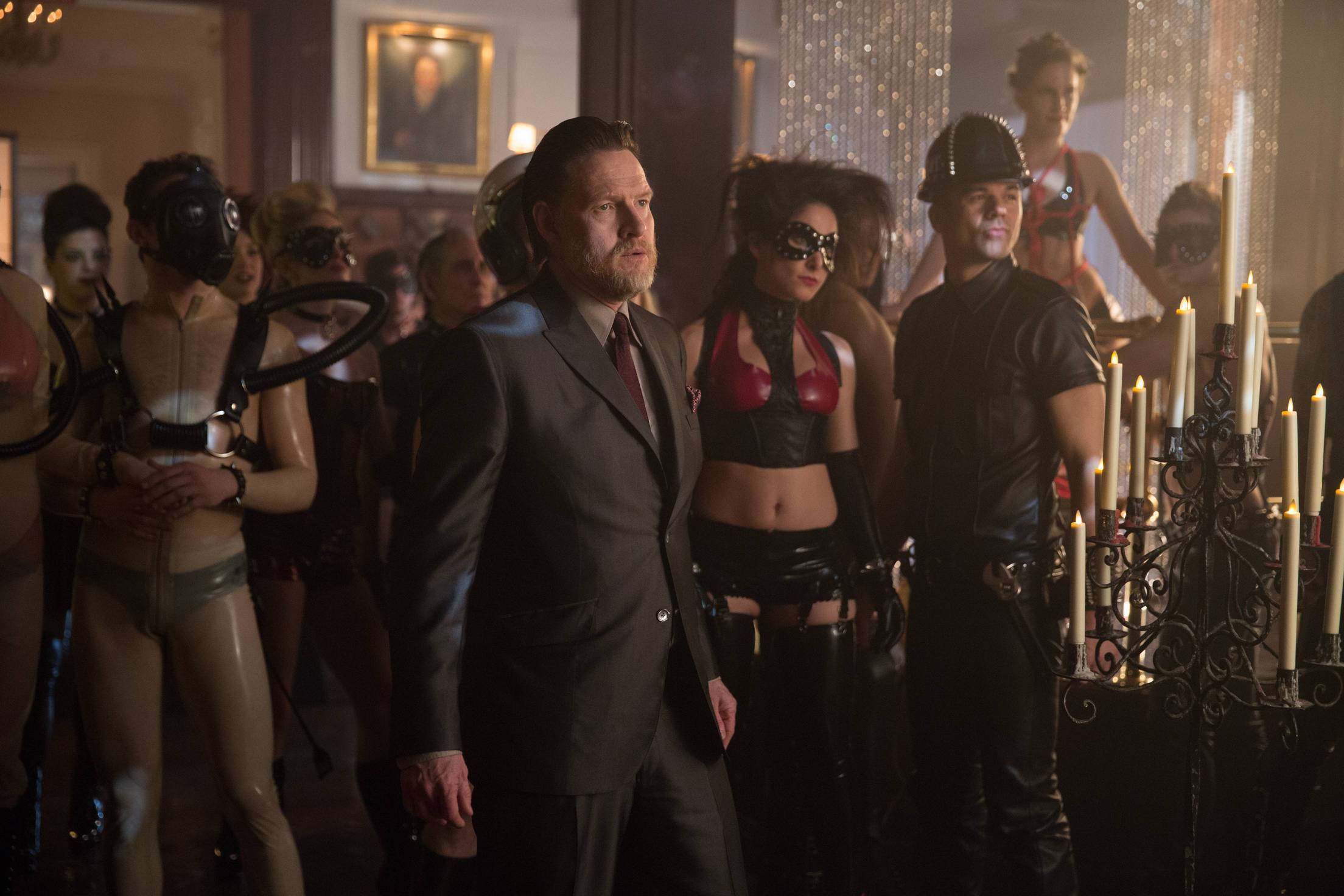 Fitting Beyoncé’s dancers for the VMA’s was a mighty cool mainstream T.V. placement for Dawnamatrix, and we were thrilled to have contributed the latex we did. But on the 4/27th aired episode of Fox’s Gotham we made prime time T.V. with our latex tube socks in a fetish scene that was handled rather perfectly for that time of night and for this popular T.V. show reaching the demographic it does.

We might be the designer of an outfit, but we are often the last to know if what we send for a placement will be used and if it is, when we might see it. With the Miss Bey appearance at the past Video Music Awards show at least we knew if our stuff made it ‘in’ we’d be able to see it (and we did) adorning Beyoncé’s dancers during her performance. With what we sent to Gotham all we knew was that the show needed specific garments (we sent vanilla colored latex tube socks with black bands at their top, black suspenders and a black bow tie, all Dawnamatrix accessories) shipped to NYC the very next day after they placed the order. What happened to our pieces, if they would be used this season, next season-at all-and what kind of a scene the might appear in, we had no clue about.

To say we have been DVR-ing the show would be an understatement.

In the “The Anvil or the Hammer” episode, Donal Logue’s “Detective Harvey Bullock” sauntered into the very upscale, tricked-out fetish club, “Foxglove.” It was a beautiful bar/lounge with equally beautiful people and garments, and even engraved invitations. There was a man in a diaper and mask being fed a bottle, lots of leggy dames, a stage at one end, and two distinct ‘school girls’ dressed in black mid thigh, high collar dresses who happened to pogo-like walk by the detective…wearing our tube socks! It made for a spectacular long shot of our wares.

Unlike what we enjoy with great magazine spreads of models wearing our latex, in the case of something broadcast on T.V., film or video, it can often be-but was not the case here-a ‘don’t blink you’ll miss it situation. On Gotham one got a nice long look at Dawnamatrix pieces during a well-handled, certainly sexy, but not  exploitive introduction of a fetish club for mainstream audiences.

Thanks to the powers that be over at Gotham. Don’t forget we have plenty of latex on hand to make a Catwoman suit or whatever else a good criminal or crime fighter might need!