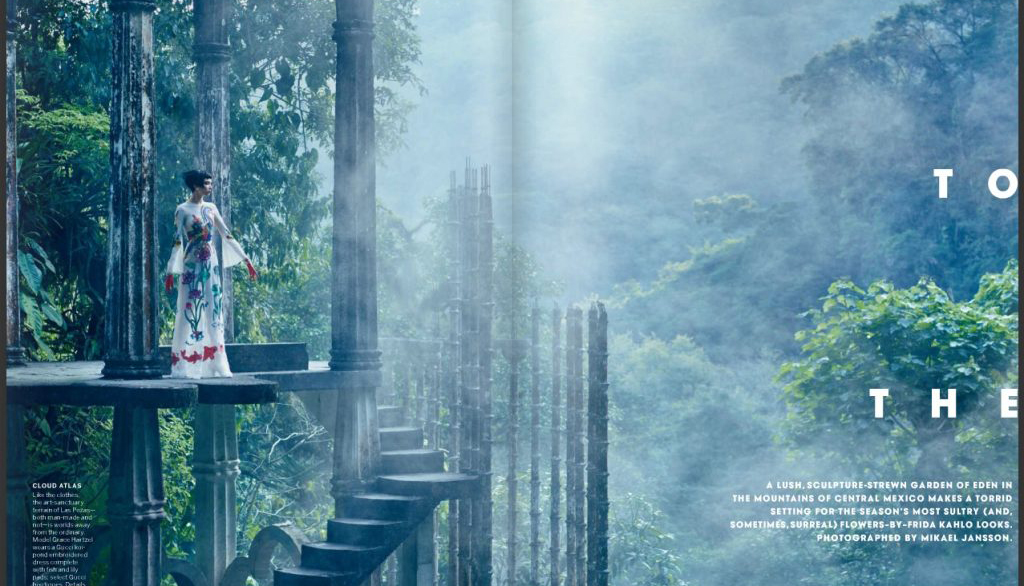 For us it’s not always just about latex clothing, high fashion alternative models, talented photographers or runways. Sometimes it’s where we find our wares, in lush locations, in faraway surreal landscapes or even busy streets bustling with nightlife and attitude that brings a thrill.

In this recent posting: https://www.cnn.com/2017/02/21/architecture/mexican-jungle-architecture-art/index.html of an article that first appeared on The Spaces website writer Mathew O’Neil explores a tropical location we know all too well. In a Vogue magazine shoot of last year (see here) model Grace Hartzel posed among the intricate stone sculptures of Los Pazos wearing our Wrist Length Gloves. Photographer Mikael Jansson set up and shot among the huge concrete pillars of the place (translated Las Pozas means “the pools”) which covers twenty acres of the deep Mexican jungle. This stunning couture fashion expedition in Vogue’s April 2016 issue actually gave us pause, as much for just how our gloves were used as for where Grace posed herself in this amazing shoot.

As O’Neil tells us Las Pozas is “the creation of Edward James, an eccentric British poet and philanthropist, known for his patronage of Surrealist artists, including Salvador Dalí and René Magritte.” Built between 1949 and 1984 and costing almost five million dollars, as O’Neil goes on to say: “To pay for his project, James was forced to auction off his extensive collection of Surrealist art.”

But the man did get to spend great periods of time amongst his “Escher-like playground” as O’Neil cleverly calls the place.

We’d venture to guess that most people haven’t ever seen a place quite like this secluded concrete “gallery” set deep in the La Huasteca rainforest. Looking at the Vogue shoot months ago and reading Mathew O’Neil’s reporting now once again we realized that location, as well as couture, can make quite the statement.