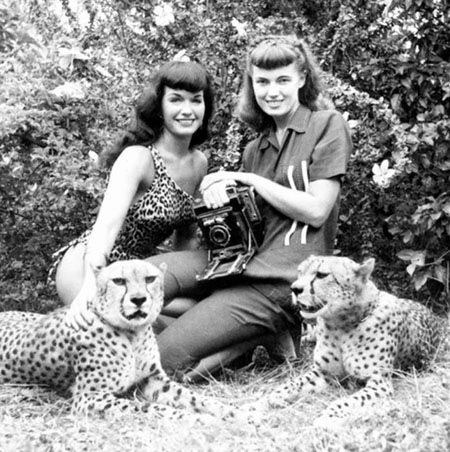 Model, early bikini champion (and maker) friend to-and maybe the most famous photographer to ever shoot-Bettie Page, all around cheesecake/pin-up/nude female model photography icon Bunny Yeager died last week at the age of 85.

Beginning her career as a model herself-and this appearance here on “What’s My Line” makes clear how stunning and statuesque she was-(https://www.youtube.com/watch?v=TbfWs6Fb8gk) Bunny got behind the camera and began shooting naked or semi-nude ladies (“cheesecake” and “pin-up” photography as it was called then) in 1953. With a love of natural outdoor locations and Kodak’s 35mm, Yeager was that rare case of a woman shooting women, which in turn made her female subjects comfortable in getting undressed for her and often all the way nude. During her career Bunny Yeager published twenty five books, saw a 2010 museum retrospective that brought her pretty much to the forefront of serious nude photographic study and was portrayed by Sarah Paulson in the film The Notorious Bettie Page.

There is no way we could do what we do here at Dawnamatrix without the groundbreaking work women like Bunny Yeager did for fashion, photography and the general exploration and consideration of the full rich possibilities of the nude female form as art. Fantasy-based fashion, sexy costume-ry, fetish iconography all were birthed from the pictures, attitude and daring of ladies like Bettie Page and Bunny Yeager (have you seen the Katy Perry/Madonna ‘Power of Pop’ photos in the June issue of “V” magazine…talk about being influenced!) We as much recognize a talent like Bunny Yeager as we are inspired by her, even more so impressive considering that this lady worked in a time when the types of photographs she took could be, and often were, sited as pornographic and therefore against the law.

Our Vintage Briefs and Bra, worn in the picture featured above by model Ludella Hahn in a ‘pin-up’ shot from Temptress Magazine, photographed by Evan Smith is one of our better selling sets of sexiness. One wonders if the world would know of pin-ups, fetish photography or just good old fashion fun-in-the-sun female nudity modeling without Bunny Yeager. How long might it have taken for this kind of photography to have even been considered serious art if Bunny Yeager hadn’t been there to create her masterpieces?

Our hats off and the front zipper on our catsuits pealed down low for you dear sweet super talented Bunny Yeager, rest in peace.