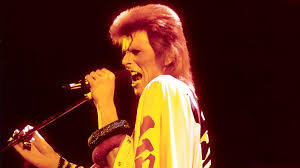 The main subjects of two publications that are in the news this week have seen a decidedly long association with alternative fashions, be it leather, lace or latex couture. With both— David Bowie and Playboy—having affected culture in acutely profound ways.

Infamous rock photographer Mick Rock was the picture-taker of record during David Bowie’s “Ziggy Stardust”-era. Rock shot many other rock luminaries in his day, but for this man who earned the moniker, “the man who shot the seventies,” the Bowie/Ziggy pictures he managed was one of his self-proclaimed high-water marks. Taschen Books has announced the upcoming publication of The Rise of David Bowie, 1972-1973, a 300-page compilation of the very best of Rock’s Bowie chronicling.

The print version of Playboy magazine has undergone some tactical changes in the past few years. As much working through first forgoing their obligatory nude, then changing that edict to allow her back in once again. Then going from monthly publishing to bi-monthly to finally quarterly, the infamous bunny mag has undoubtedly been through a lot in these past few years near the beginning of their 7th decade in existence. This week Playboy announced they are suspending production of the print magazine in light of the slow down of the culture due to the Coronavirus. Playboy’s Spring 2020 issue will be the last printed Playboy magazine for the year, with no further announcement made for the future of Playboy in print. The magazine continues to be published digitally (the Spring issue is already up/out in that format).

One could argue David Bowie was as much a rock icon as a fashion influencer, back before that word had the connotations it does today. And Playboy was a leader in showing women in some of the most arrestingly sexy and sometimes alternate naughty couture ever seen (although lots of the pictures in a spread were nude).

How could Dawnamatrix not celebrate them both?