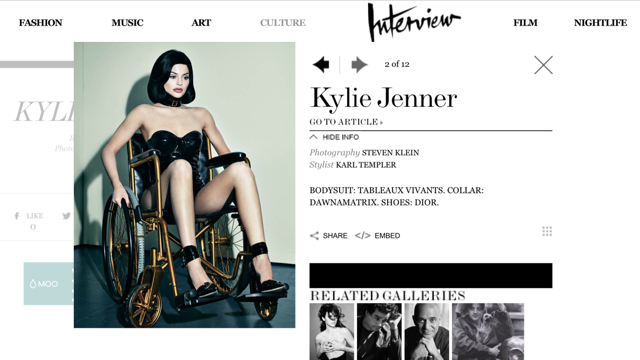 Well, we made “The View”…or at least a mention of our latex clothing did. Concerning the new Kylie Jenner
Interview Magazine” photos, Whoppi and the ladies hit on not only how sexy the pictures of Kylie were (Raven-Symoné cried out “Her ass was out!” in effect calling-out the Dawnamatrix “cheeky skirt” Kylie was wearing) but the controversy that is currently airing about the fact that Kylie appears in some of the pictures sitting in a wheelchair.

When we supply our latex wardrobe pieces and outfits for a shoot we don’t always know how they will specifically be used (for the Kylie Interview shoot we didn’t even know it was Kylie we were dressing) so we really were as surprised (and of course thrilled seeing as Kylie was wearing our couture) as anyone that photographer Steven Klein paid homage to Allen Jones’ famous erotic triplet sculpture Hatstand, Table and Chair (as we mentioned in the last blog) as much as posed Kylie in as much of our clothing as he did…and that she appears sitting in a wheelchair (and less we forget the wheelchair photos of Helmut Newton that come to mind here as well.)

No doubt with viral video, Instagram, Twitter, social media in general intervening in our lives as they do, being a celebrity is daunting these days. Surely it can be easily argued that a Kylie Jenner, as much as her “half” family of Kardashians, as well Lady Gaga, Michael Jordan, even Whoopi Goldberg, all of our celebs court the attention they do simply by being in the fame game. But lots gets heaped upon the heads of our most famous that don’t exactly create or court.

Surely we’d never want anyone to feel mocked and we do agree that Jenner, the folks at Interview and Klein and crew were in no way looking to hurt anyone with the Kyle Jenner wheelchair pics.