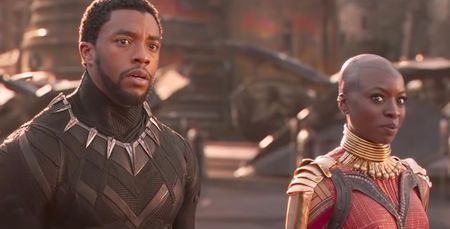 We see them in their latex, leather, and spandex, brandishing their powers and weapons, figuring they will live forever. Even when an arch-nemesis like a Bane or a Thanos comes calling, we can rely on our superhero to save the day. But real life intrudes for the men and woman who portray our fantastic characters, as it did for Chadwick Boseman, this week. The 43-year old star of Black Panther, among other movies, died of cancer yesterday.

As Boseman said in his Instagram account at the time it was “the honor of his career to bring King T’Challa to life in ‘Black Panther.’” And although cosplayers and comic fans would argue that this was the best-known role in Boseman’s short but stunning career, he managed many acting highlights.

A serious basketball player in high school, it took one of his friends and teammates to get shot and killed to turn Boseman to the arts. Processing his emotions over his friend’s death, Boseman wrote a play, and when the time came for college, he chose an arts program at Howard University. While there, he took an acting class with Phylicia Rashad, who helped Boseman into a high-end theater program at the University of Oxford.

Boseman taught acting at the Schomburg Center for Research in Black Culture in Harlem, moved to the Bedford-Stuyvesant neighborhood of Brooklyn, and kept writing plays. Eventually, he landed roles on “Law & Order,” “CSI: NY,” and a recurring role on ABC’s “Lincoln Heights.”

Ensconced then in Hollywood, Boseman soon landed his breakout role as Jackie Robinson in 42, played James Brown in Get on Up, then Thurgood Marshall in Marshall. His run of and popularity over playing real-life icons changed when he starred in Black Panther, a role he had debuted in Captain America: Civil War, and would come to reprise twice more after Black Panther, in Avengers: Infinity War and Avengers: Endgame.

By all accounting, we have lost the very talented Chadwick Boseman way too soon.