Celebs In Costume At Comic-Con 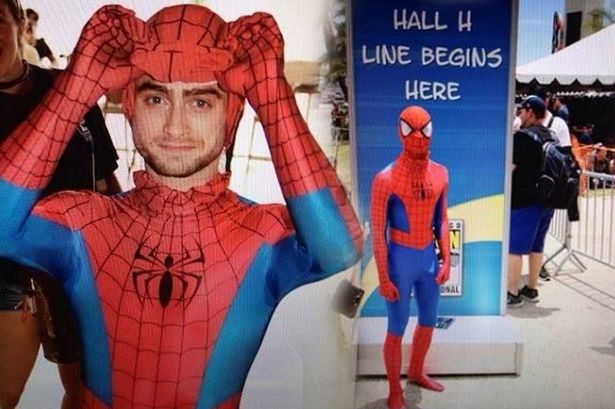 Sure we have been on about Comic-Con before (the beginning of this month in fact) but this week we are getting the post-convention wrap-ups across T.V. networks and blogs (ain’t-it-cool-news being one of the best.) Beyond catching premiers, seeking autographs, taking selfies at celebrity sightings (not to mention getting all the free swag) there was all the costumes of cosplayer and fans to celebrate. Mostly handmade, the array of stuff is always amazing, the detailing impressive…not to mention how sweaty all that latex leather and spandex has got to be!

Joining in on the fun this year, pretty much as they have been for quite a few of the past years, celebrities actually enjoyed dressing-up at Comic-Con. Revealing themselves on Instagram and Twitter feeds, posting on Facebook, the famous donned masks and capes as much it seems for anonymity as to later reveal they were so cool as to dress-up in the first place.

There was Daniel Radcliffe dressed as Spider-Man, not hiding from Voldemort but more from fans. Peter Jackson was a scary black-and-white jester (he posted some Facebook pics of himself following someone wearing “The Hobbit” T-shirt) and  Jack Black went as a storm trooper claiming he simply wanted to be left alone to buy action figures. Game of Thrones Maisie Williams sported a Guy Fawkes mask on the floor then later at a party wore a Ryan Jude Novelline dress made of graphic novel pages. She’s worn this dress before, but it was no less impressive her second time out.

No strangers to masks, hoods, capes and fantasy costume accessories (like our Leopard Hood, Long Cape or even the super fantasy style of our Inflatable Raccoon Tail it makes one’s mouth water thinking what a Daniel Radcliffe might look like sporting a latex raccoon tail!

Let’s just dream of the possibilities…