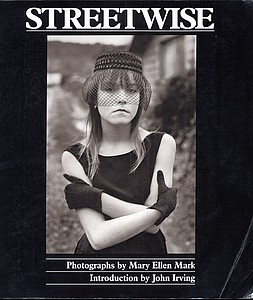 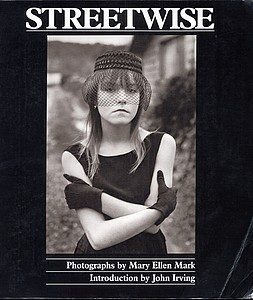 As we have mentioned time and again, creating latex couture is only one piece of the overall puzzle of thrusting Dawnamatrix wares on the world. We have to show our creations, either on models walking runways at various events or in print, online or on video and film. It is a collaborative effort getting our latex designs to the wearer, and we have always recognized the talents of hair and make-up artists, models, lighting designers, back stage crew, stylists and photographers who make things happen in our world.

This week we note the passing of one of these talented folks, photographer Mary Ellen Mark.

Moving from her home state of Pennsylvania to NYC in the mid 60’s, Mark chronicled lots of the city’s social ills in the last half of the decade and beyond. As much a photographer as documentarian filmmaker, with her husband director Martin Bell she created the much celebrated (and Academy Award nominated) film “Streetwise,” a movie that chronicled three decades of a crack-addicted prostitute and was indicative of those ‘tougher’ subjects Mark was interested in (Streetwise actually began as photographic expose Mark was commissioned to shoot for Life magazine.)

This super talented lady also shot couture, for magazines like Vogue and Vanity Fair and was an ‘on set’ unit photographer for such films as “Alice’s Restaurant,” “Catch-22,” “Carnal Knowledge” and “Apocalypse Now” all the way up to 2008’s “Australia.” Mark was also the writer/associate producer and still photographer for the 1992 film “American Heart,” another movie her husband directed.

Working as we do with so many talented folks, as much behind the ‘picture’ as in front of it, it’s as much our duty as honor to celebrate unique visions and true artists no matter what field they work and play in. Dying this week in New York City at the age of seventy five, Mary Ellen Mark leaves 18 collections of her work published, a great treasure trove of pictures, singular film documentaries and an artistic legacy unparalleled.