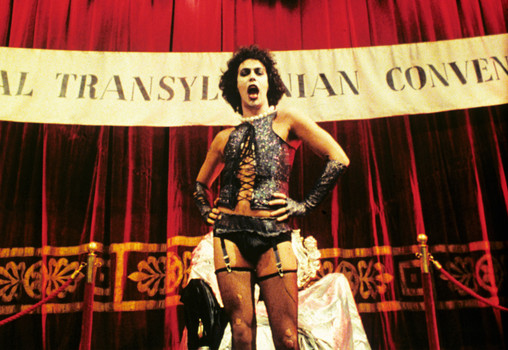 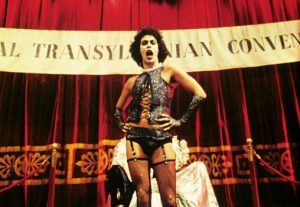 Latex gloves, corsets, heels and fishnets…no, it’s not a weekend fetish party we are premiering a new collection at, it’s The Rocky Horror Picture Show. King of midnight movie showings, from stage musical to iconic ‘failed’ Hollywood release, one of the most talked about and certainly one of the most talked ‘at’ movies of all time, TRHPS turned 40 this year and there were much ballyhooed ‘reunions’ of certain cast members-Tim Curry, Susan Sarandon, Barry Bostwick, Patricia Quinn, and Meatloaf-for photo shoots and sit down interviews in this Halloween season.

Through all the camp and that “don’t dream it, be it” message of the movie one can almost overlook Rocky’s wonderful fetish costume design. Beyond the ridiculously sexy Tim Curry in garter, fishnet, heels and panties (a get-up that caused Meatloaf, come to play rocker “Eddie” for the L.A. stage version of Rocky, to almost walk-out of the audition for good!) there are the 50’s tropes of the perfect little sweater Susan Sarandon’s “Janet” wears (not to mention her whiter then white, panties and bra set) the amazingly tight spandex, satin and what-have-you that the party guests of the movie sport, the gold Speedo of the Rocky monster, Meatloaf’s leather jacket “biker” style and the textured gold and black tunic space-garb Riff Raff (played by Richard O’Brien, writer of Rocky) and Patricia Quinn’s “Magenta” wear at the end of the film.

There is just so much going on in The Rocky Horror Picture Show to delight even the most passing fetishist as well as over-the-top rock fan. That the stage show (in both the U.K. where it began) and the U.S. did top business, but the movie flopped when initially released, then saw life again in its tribal midnight showings is one of those real legends where the truth is even stranger than any rumor could ever be. The growth of the rocky cult, fans who not only built that infamous talk-back that goes along with the movie, but dressed-up to act out the film in cross-country “floor shows” could be a seen as a fetish all its own. 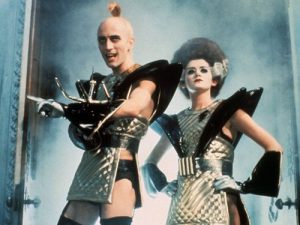 Happy 40th Birthday Rocky Horror and thanks for once again affirming how wonderful it is to dress as you like and “Give yourself over to absolute pleasure.”