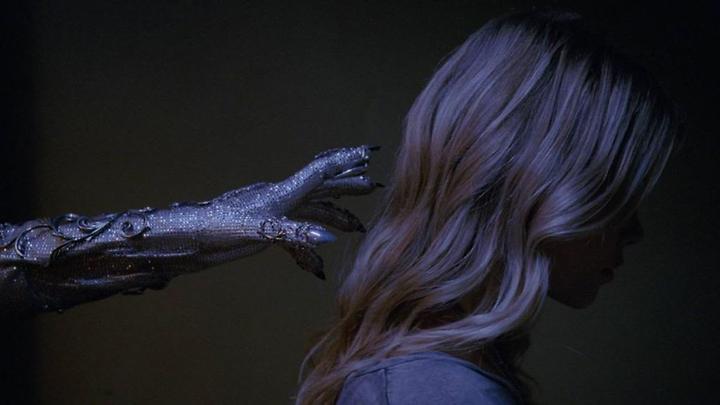 Checking in with or without bags, in a corset and latex leggings, or simply as French girls looking to get close to L.A.’s tourists spots, the Hotel Cortez of American Horror Story’s new season is the place to get to…or at least die in. Sans Jessica Lange this time around, the FX horror anthology series returns with cast members from before-Sarah Paulson, Lily Rabe, Kathy Bates,  plus newcomers Cheyenene Jackson, Max Greenfield and most notably-if just for her costuming alone-the “Little Monster” maven, Lady Gaga.

As one would expect the vampire fashionista that is Lady Gaga’s character, Elizabeth/The Countess, struts round in the premier episode in the most interesting clothes. While she’s not exactly sporting that Lady Gaga latex styling we are so quick to salivate over (yet) she was seen in this past Wed. night’s show in some yummy cinema couture to be sure. Not only pulled into a corset, Gaga’s cool female vampire stepped out on the town with her lover (actually walked over to a nearby Hollywood cemetery showing the silent classic Nosferatu) in a long red coat with train and later sported silver pasties. Gaga and her lover’s gloves (hers are quite chainmail encrusted) are another delicious horrible accessory of costume designer Lou Eyrich’s imagining, inspired he claims by Daphne Guinness.

Decidedly there was a lot to “digest” in the premier. We were given horrific vignettes of what the characters are up to presently, a thru-story of a tortured cop played by Wes Bentley, flashbacks and tickles of what is really going on here in this fictional downtown L.A. hotel and in Bentley’s past. Whether the scares will stay as heated (and bloody), whether more nasty characters will be introduced, and whether the bare booty-to-clothed percentage will grow closer, who knows.

But American Horror Story Hotel has begun, the set design, shocks and so far Gaga’s costumes are scrumptious. Dare to check in here.