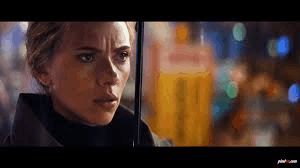 Although PVC, not latex, we’ve still always had our eye on Black Widow’s costume. It’s been difficult to ignore the shapely sexy Scarlett Johansson since we first met the onscreen persona of Natalia Alianova “Natasha” Romanova in The Avengers. Now we learn Marvel Studios Director of Visual Development Andy Park is planning two new costumes for Miss Johansson for the Black Widow solo film to arrive on May 1, 2020.

All of us cosplay fans and fantasy costume fashionistas will be drooling at the big reveal, surely.

Back in August, Park had painted an official poster for the D23 Expo, and the “worlds’ largest gathering of Disney fans” Twitter account not only revealed that poster but a white Black Widow concept costume down the same feed. In a just-released Instagram post Park mentions the two new suits that Black Widow will be wearing for her film, what he called her “8th & 9th look,” but he did not admit if either would be that white suit fans have been speculating over.

In photos released from the set of Black Widow, Johansson is indeed wearing a newly designed wardrobe. What was shared of these candid shots (again across Twitter), reveal the lady wearing a definite gray one-piece, sporting back accents, and a black ‘Y’ across its back.

Still, there was no white costume to be seen from these pictures from the set.

The upcoming Black Widow takes place between Captain America: Civil War and Avengers: Infinity War and has Black Widow teaming up with spy Yelena Belova to battle Taskmaster. Not to reveal a ‘spoiler alert’ if you have yet to see Avengers: Endgame, but where the new Black Widow movie falls in the chronology of these Marvel releases seems flawlessly logical.

Park has designed all seven incarnations of Black Widow’s costume since 2012’s The Avengers.