“Bin Isolation Outing,” Ballerinas and Unicorns: dressing Up in the Time Of COVID-19 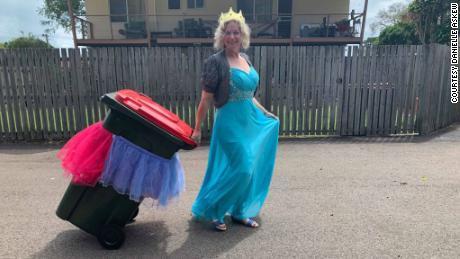 In our last blog, we reported on Vicky Devika strolling through her local supermarket dressed in a head-to-toe latex outfit. As her “Elusive Rubber Creature” character, the Canadian model/artist/DJ was as much shopping for groceries as attempting to demystify fetish couture to the masses. But there are plenty of people, while not so specifically wardrobe conscious, are still taking to the streets dressed in wild and fun fashions to alleviate some self COVID-19 blues.

There’s even a Facebook group that has started for this seeming new cultural pastime.

Each time UK dancer Clare Meardon takes her dog Hendrix out on his daily walks, she tries to step out in ever more interesting wardrobe choices. The 40-year-old has as much donned a ballerina costume, attempted some cosplay as a masked superhero as she has made herself up to resemble a unicorn. This all started as a dare for Meardon, which she has taken to since the beginning of this month. Her husband has been documenting her walks by taking videos and pictures of her.

In addition to Clare, there are people dressing up as members of the “Bin Isolation Outing,” Facebook group. What started as a joke created by Danielle Askew, in her native country of Australia, has now spread worldwide (CNN reported on the group). The BIO-ers dress up in haute couture to bathing suits, when stepping out to take out their garbage (bins).

And this group, Clare and are only a few going out and about across the globe, in some unusual frockery.

The reasons for all this dressing-up could range from people looking to show solidarity to a group, maybe enjoy some culturally accepted exhibitionism as to beat the self-quarantining doldrums. Whatever the motivation behind Clare Meardon or a brand new Facebook group, as always, it seems we are finding ever more creative ways to enjoy the day…and maybe bring a smile to others.