American Horror Story and Fishnets on a Plane: Lady Gaga Is At Us Again 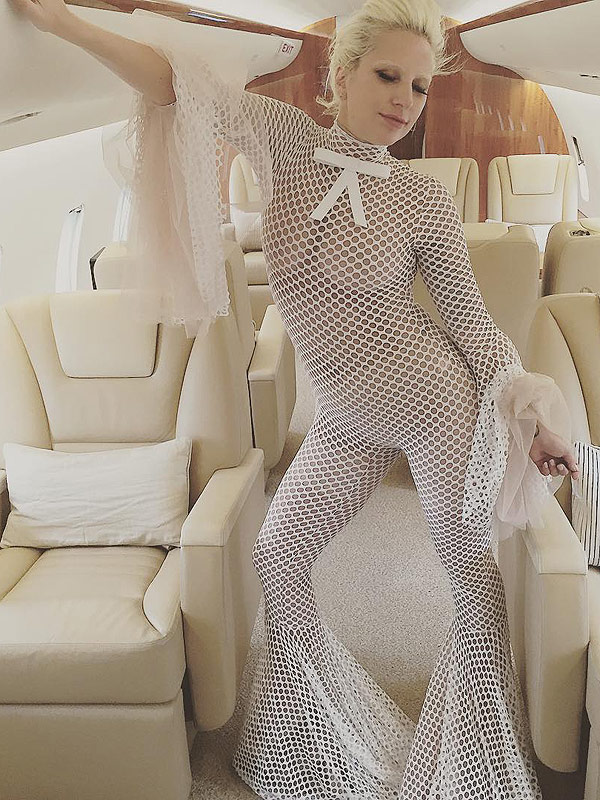 Lady Gaga left the latex clothing, feathers and meat at home, this time showing-off her lean little bod in a see-through white fishnet jumpsuit. Sporting platinum-colored hair and just as white eyebrows Lady G. posed for this latest round of Instagram pics while traveling on a private plane, revealing her style in this flared sleeve/bell bottomed one piece that has the net all agog…until some other wild selfie from a celeb makes the rounds later this week.

As we can all expect, this is not all of Gaga will be seeing. Not only is the pop star presently entertaining sold out crowds (with Tony Bennett no less) on her “Cheek to Cheek” tour, supporting the album with Bennett of the same name, but she’ll be seen come October in the 5th season installment of the American Horror Story series. Announced back in February, but certainly news again since Comic-Con, the “Little Monsters” creator will be joining the monsters of the popular show in American Horror Story: Hotel and Scream Queens. Gaga’s character will play a nasty lady somehow involved with fashion (see the teaser trailer here).

Marrying the truly disturbing with an amazing array of wild characters (in costumes we have applauded plenty here) the American Horror Story franchise places viewers in different locals and times…but manages to keep disturbing us time and again. Gaga’s feathery silvery hand and needle-like nails in the above teaser trailer (if indeed it is even her), the brocade sleeve, the elegance of the unfurling movements, the while “fashionable” horribleness to it all, certainly fits the 29 year old’s love for things shocking, and once again showcases a tease of how much AHS loves to keep shocking us. As Gaga herself said on Twitter when the above clip aired: ‘#GagaOnAHS I hope u like being scared.’

Fishnets on a plane or gracing the upcoming season of American Horror Story, as always Lady Gaga has us talking about what she is doing, as much as over what she is wearing.