All The News That Kinda Fits: The Katy Perry Sundress Controversy, RiRi For Puma and Some Calvin and Skin From Kendall Jenner 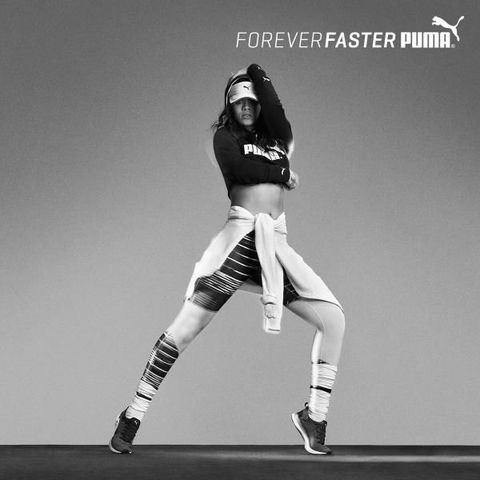 Does any of what’s below really rate as ‘hard’ news, certainly not. But from time to time Dawnamatrix likes to take a spin round this great big wide world of ours to opine, expound and generally report on fashion happenings, be they weird, mundane or something in between. This week the blog ‘o sphere was all a’twitter with Katy Perry’s supposed Sunflower Dress controversy, Kendall Jenner showing some Calvin and skin in “V Magazine” and Rihanna’ first ad for Puma.

The Katy Perry Sundress Controversy stems from an outfit the pop diva wore on stage in Taiwan just this week. During one of the many costume changes throughout her concert, K.P. sported a green dress riddled with big sunflowers up and down it, and a cape made from the Taiwan flag. Colorful and cute, you say (and yes, we are down with flowers adorning dresses, see here…) surely, but some folks take the flowers to be a statement of support for the Sunflower Student Movement (this is a group of students who have taken to protesting a trade deal between Taiwan and China). Katy has been sporting sunflowers in her Prismatic tour since it began and she did not comment about what she may-or may not have-meant wearing her dress and cape.

With all the attention her dad has recently gotten from his Diane Sawyer interview, Kendall Jenner (and in fairness the whole family) still seems to be able to grab attention. The 19 year old strips down to Calvin Klein undies and relates her ‘struggle’ into a modeling career for “V Magazine” this month. Kendall presently models for C.K. and is also pushing her mug for Estée Lauder.

Another pop diva made news this week as Rihanna’s first ad for Puma hit. The cool million deal sees RiRi as the sneaker’s “global ambassador.” She is tall, tough and cool sporting the new “Pulse XT” kicks, leggings (and we are certainly know how sexy leggings can look…see here) and a Puma-cropped tee and hat.

Is this all the news that’s fit to print? Who knows.