All Hallows Can Get All Weird 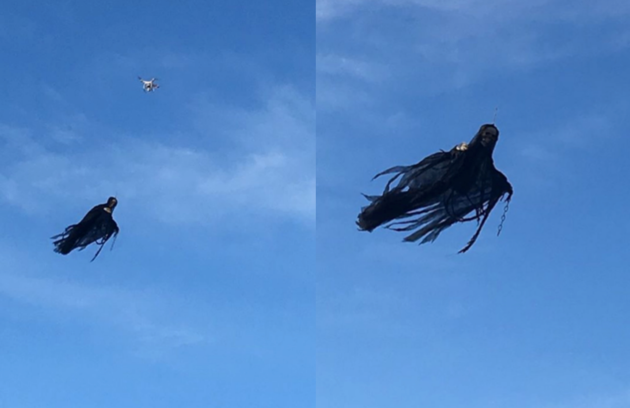 As it slips ever closer to All Hallows you might be getting out your thigh-highs for sexy maids outfits, your wife could be donning some latex accessory, cosplayers ruminate over the ‘amateur night,’ and kids enjoy dressing up as their favorite superhero. But beyond the fun there is lots of other wacky costume happenings a’happening across the country…some for Halloween and some, we dare think, not predicated by the holiday at all.

In Portland, Maine a man dressed as a tree (yes, you read that right) walked slowly across a busy street to see “how people would react” and how he could impact “people’s natural choreography.” The man was helped to the curb and out of traffic by two of Portland’s finest who arrested the branched-and-leafed perpetrator on a misdemeanor. Civic-minded or readying his costume design for the weekend?

In New Jersey, two teen girls were charged for a ‘clown hoax,’ one of seemingly many happening across the country. Building off of the actual clown sightings that started in South Caroline a few months ago, the “epidemic” of seeing scary clowns comes as much from our collective fear, as there are seemingly many people dressing up in make-up, funny noses and floppy shoes to scare-or even worse-their victims. The hoaxes followed, as they often do, where people like the girls in New Jersey, claimed they saw clowns when they did not.

A northern Wisconsin man used current technology and textile art in a certainly unique way. For a pre-Halloween stunt the man attached a flapping skeleton-ghost doll to a drone…and flew it over his neighbor’s heads.

And as always happens some costumes have been pulled by retailers for the 2016 Halloween Season. Disney’s “Moana” costume, from the upcoming film of the same name, set off too much controversy over “costume caricaturing” of Polynesian culture. And what many sites are calling the most offense costume of the year (quite a distinction) the “Tranny Granny” has been taken off the shelves of many retailers.

So go out and make merry, be safe and enjoy the candy…and stay clear of the clowns, or just imagining them.