Adele Across The Vogue Pond 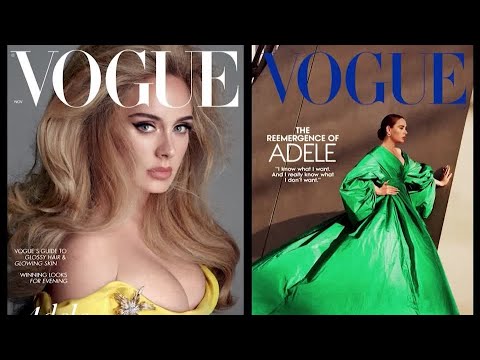 There might be no latex here, but there is stunning couture! Throughout Adele’s November Vogue and British Vogue pieces (this is the first time the British and American version of the famous fashion magazine have sported the same cover star for the same issue), the famous singer wears an array of fabulous outfits. In fact, for one, the “Hello” singer is actually affecting retail sales.

In what is being called a “transatlantic takeover,” Adele wears a green Maison Valentino gown with a sweeping train, with oversized sleeves on her American Vogue cover. On her British Vogue cover, the singer sports a bespoke Vivienne Westwood corset gown. It’s this second cover that has sent potential shoppers searching for corset gowns in the UK, affecting online searches so much that numbers have spiked.

How’s that for being an ‘influencer’?

Sitting for her first interview in five years, the “Rolling in the Deep” singer talks music, romances, single parenthood, and body image. In addition to her incredible successes, Adele worked hard over the past three years to lose one hundred pounds, a transformation that became obvious as she posted pictures to social media and slowly made public appearances.

The British singer addresses her weight loss in detail for the first time in her Vogue pieces. When asked why she did not discuss it all before—the blog-sphere has certainly been debating and discussing Adele’s weight loss for the past few years—Adele simply says, “I did it for myself and not anyone else. So why would I ever share it?” and adds, “You don’t need to be overweight to be body positive, you can be any shape or size.”

Making history either with record sales, concert sell-outs, and transatlantic Vogue covers, Adele is as she always was (100 pounds lighter or not): one of a kind.