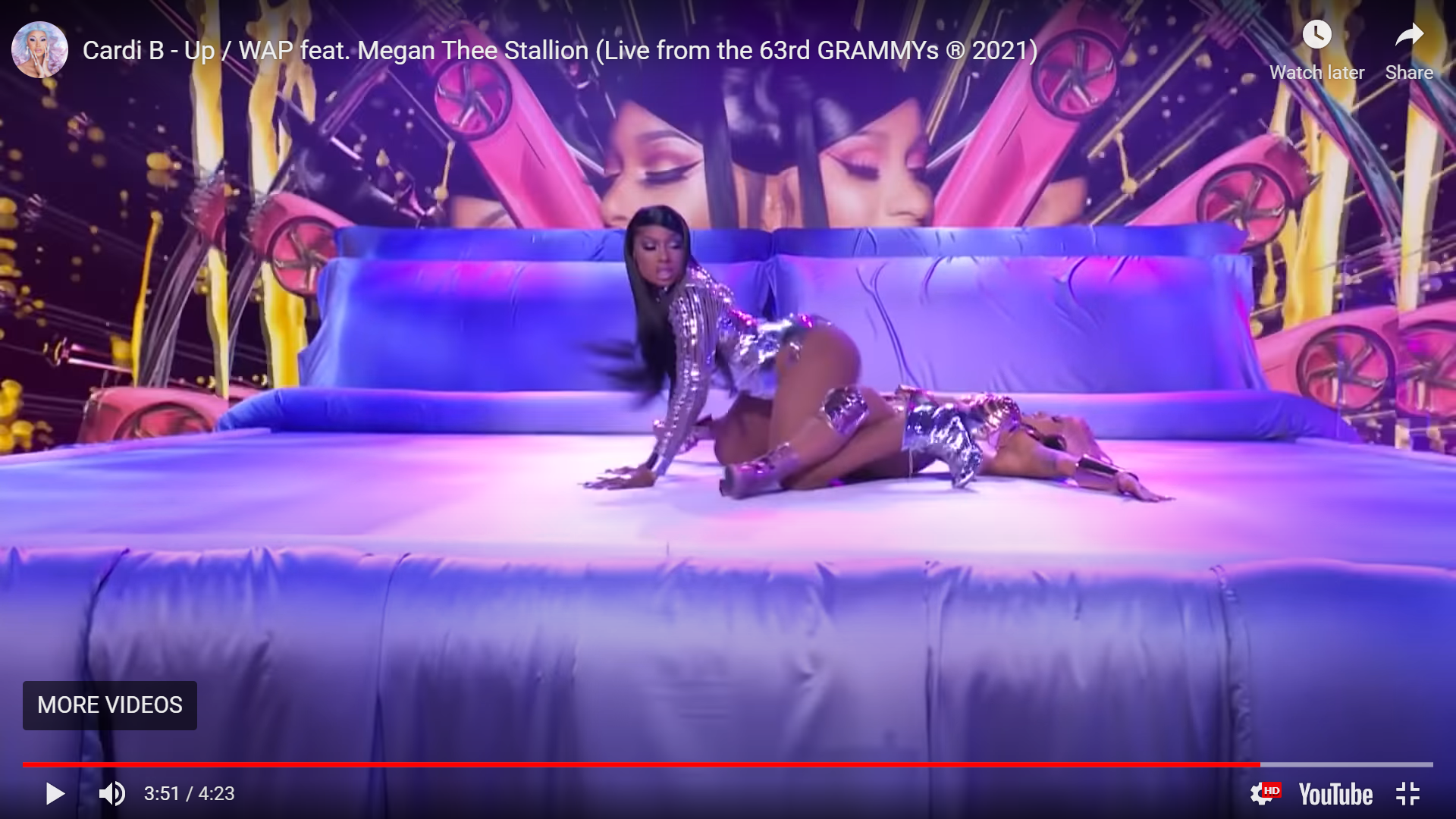 We can always count on the Grammy’s for a peek at some latex couture, leather wardrobes, alternative fashions in general. The 2021 Grammy’s last Sunday even garnered outrage from The National Center on Sexual Exploitation.

What a show it was!

Nominated for six Grammy’s, Dua Lipa was sure to sport something stunning… and she did. She wore a shimmery see-thru ‘naked’ dress with cutouts and a thigh-high slit. As always, the lady outfitted herself in high sexy style.

Billie Eilish wore monochromatic floral bell-bottoms and a button-up shirt from Gucci. She accessorized with the same floral design across her gloves, face mask, and bucket hat.

Not that she would not push some controversy with what she wore and how she wore it later in the show (which we will note in a bit), but Megan Thee Stallion entered the 63rd Grammy’s in haute couture. She wore a strapless bright orange Dolce & Gabbana with a big bow and thigh-high slit.

For the men, Harry Styles wore Gucci velvet trousers, a yellow-checked jacket, and a purple boa. Trevor Noah wore a simple black tux, and DaBaby, keeping with that floral tradition, was in a full silk floral suit.

Not for sexy style or wild color, but one might say that Phoebe Bridges outdid everyone for the most imaginative wardrobe choice for the 63rd Grammy’s. Continuing with her tradition of wearing a Halloween costume when she performs, the The Punisher singer wore a Thom Browne skeleton dress (a black dress with a shiny white skeleton embroidered on its front).

Caroline Trentini wore the same at the 2019 Met Gala.

About that call of sexual exploitation…

The NCOSE said that Cardi B and Megan Thee Stallion’s performance of “WAP” at the Grammy’s “….could have been cut from a hardcore pornography film” and also “…contributed to the sexual exploitation of women by glamorizing prostitution and stripping.” Maybe they didn’t like the huge stiletto on stage or the bed, or what Cardi and Mega Thee Stallion did on that bed. Both women indeed sported some fantastic couture though; Cardi slowly removing clothes to get down to a big silver bikini and Megan in a silver body-suit.

Who knows what it all glamorized, but the divas certainly made a lasting impression.